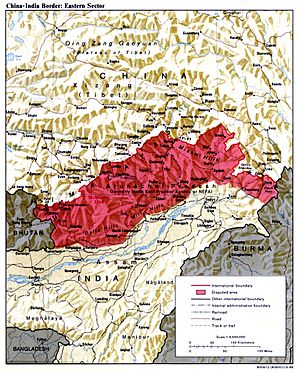 The McMahon Line marks boundary between Chinese-held and Indian-held territory in the eastern Himalayan region. The line was the focus of a brief war in 1962, when Indian and Chinese forces struggled to control a disputed area (shown in red), much of which is a high altitude wasteland.

The McMahon Line is a demarcation line drawn on map referred to in the Simla Convention, a treaty between Britain and Tibet signed in 1914.

Although its legal status is disputed, it is currently the effective boundary between China and India.

This dispute was used a pretext in a war between China and India in 1962.

All content from Kiddle encyclopedia articles (including the article images and facts) can be freely used under Attribution-ShareAlike license, unless stated otherwise. Cite this article:
McMahon Line Facts for Kids. Kiddle Encyclopedia.