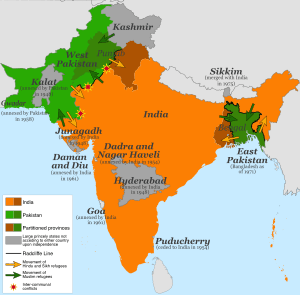 The regions affected by the Partition of India: green regions allocated to Pakistan, orange to India. The darker-shaded regions represent the Punjab and Bengal provinces partitioned by the Radcliffe Line. The grey areas represent key princely states that were eventually integrated into India or Pakistan.

The Radcliffe Line became the international border between India and Pakistan (which also included what is now Bangladesh) during the partition of India. The line divided Bengal into Indian held West Bengal and East Bengal which became East Pakistan in 1956. The line was decided by the Border Commissions headed by Sir Cyril Radcliffe, who was to divide equitably 175,000 square miles (450,000 km2) of territory with 88 million people. The line took effect on 17 August 1947 after the Partition of India. When the partition was implemented, there were some problems:

All content from Kiddle encyclopedia articles (including the article images and facts) can be freely used under Attribution-ShareAlike license, unless stated otherwise. Cite this article:
Radcliffe Line Facts for Kids. Kiddle Encyclopedia.