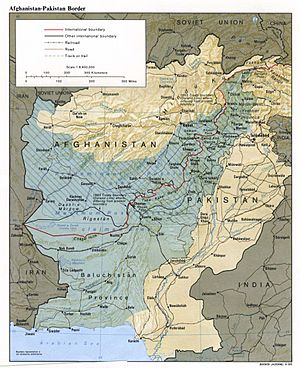 The Durand Line (in red) between Afghanistan and Pakistan. It was named after Mortimer Durand, a British diplomat and civil servant of colonial British India.

The Durand Line is a frontier boundary between Afghanistan and Pakistan. It was established after an 1893 memorandum of understanding (MoU) between Mortimer Durand of British India and Afghan Amir Abdur Rahman Khan. Referred to as a frontier line, it is named after Mortimer Durand who was the Foreign Secretary of colonial British India at the time. The 1893 MoU is a one page document, signed by Durand and Khan in which the two men agreed that Afghanistan and British India would remain friends, and not start war with each other. It also mentions that the military of Khan may import weapons into Afghanistan through the Afghan tribal areas and that British India would pay money to Khan every year. In 1947, British India ended and the new state of Pakistan was created. In 1949, Afghanistan announced that the 1893 MoU became void (no longer valid) and has never accepted it since then.

The Durand Line cuts through the Afghan tribal areas, politically dividing ethnic Pashtuns and Baloch people who live on both sides. Although shown on maps as the western international border of Pakistan, it remains unrecognized by Afghanistan and leaders of the Pashtun people in Pakistan. The local people of the region have always refused to recognize the Durand Line, they cross it back and forth without documents. Afghan Pashtun leaders claim Pakistani territories and say that the Durand Line is "an issue of historical importance for Afghanistan. The Afghan people, not the government, can take a final decision on it."

All content from Kiddle encyclopedia articles (including the article images and facts) can be freely used under Attribution-ShareAlike license, unless stated otherwise. Cite this article:
Durand Line Facts for Kids. Kiddle Encyclopedia.