The snow leopard or ounce (Panthera uncia) is a large cat native to the mountain ranges of Central and South Asia. It is listed as Vulnerable on the IUCN Red List of Threatened Species because the global population is estimated to number less than 10,000 mature individuals. As of 2016, the global population was estimated at 4,678 to 8,745 mature individuals.

The snow leopard inhabits alpine and subalpine zones at elevations from 3,000 to 4,500 m (9,800 to 14,800 ft), ranging from eastern Afghanistan to Mongolia and western China. In the northern range countries, it also occurs at lower elevations. The cat is closely related to the other big four in the genus Panthera. 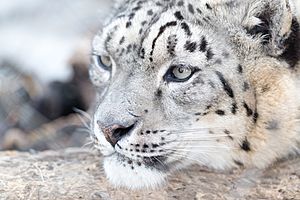 They have grey and white fur with dark rosettes and spots, and their tails have stripes.

Its fur is very long and thick to protect it against the cold.

Their feet are also big and furry, which helps them to walk on snow easier.

Their tails are 80 to 105 cm (31 to 41 in) long. They use their long tails for balance and as blankets to cover sensitive body parts against the severe mountain chill.

They are one of the cats which cannot purr. The snow leopard has the longest tail of any cat, their unusually long tail helps maintain balance in the rocky terrains. 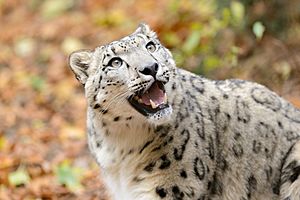 The snow leopard is solitary, except for females with cubs. They rear them in dens in the mountains for extended periods. Male snow leopards require a territory of around 80 square miles, while females require up to 48 square miles of territory.

Like other cats, snow leopards use scent marks to indicate their territories and common travel routes. These are most commonly produced by scraping the ground with the hind feet before depositing urine or scat, but they also spray urine onto sheltered patches of rock. 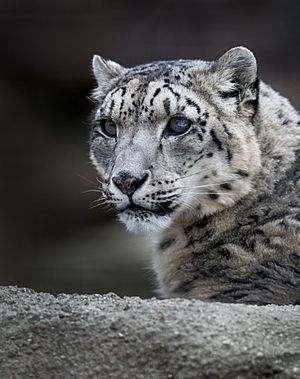 Snow leopards are well camouflaged, and are crepuscular (most active at dawn and dusk). They are known for being extremely secretive and well camouflaged. They stalk and eat medium-sized prey like Ibex, bharal (mountain sheep) and wild goats. It can survive on a single sheep for two weeks.

Snow leopards prefer to ambush prey from above, using broken terrain to conceal their approach. They try and land on the sheep, and kill it directly. If the sheep runs, they pursue it down steep mountainsides, using the momentum of their initial leap to chase prey for up to 300 m (980 ft).

They kill with a bite to the neck, and may drag the prey to a safe location before feeding. They consume all edible parts of the carcass, and can survive on a single bharal for two weeks before hunting again. Annual prey needs is 20–30 adult sheep (bharal). 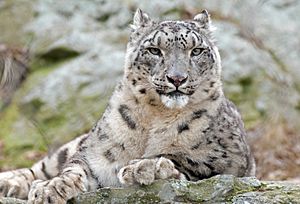 Snow leopards eat almost anything they can catch, often hunting animals three times their size. Their main sources of food include wild sheep and goats, pikas, hares, and game birds. In the summer, they eat mostly smaller prey, such as marmots. At other times their prey includes wild boars, gazelles, markhor, bobak, tahr, ibex, bharal, mice, and deer. They stalk their prey and usually begin their attack when they are 20 to 50 feet (6-15 m) away.

The snow leopard's broad paws act as snow shoes and give them traction as they chase their prey across stone, snow, and icy surfaces. They are at their best when they can run across the hard, icy crusts that form above banks of deep snow while their prey breaks through the crust, getting mired in the soft, underlying snow. 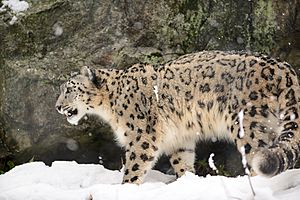 Snow leopard in the snow

Snow leopards live in the high mountains of China and Central Asia, particularly throughout the Himalayas. They typically have a hunting range or territory of 100 square miles (260 square km), because very few prey animals live in the harsh, mountain habitat that is home to the snow leopard. 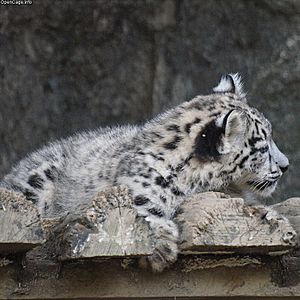 Snow leopards become mature at two to three years, and normally live for 15–18 years in the wild. In captivity they can live for up to 25 years. Females have a gestation period of 90–100 days, so the cubs are born between April and June.

The mother gives birth in a rocky den or crevice lined with fur shed from her underside. Litter sizes vary from one to five cubs, but the average is 2. The cubs are blind and helpless at birth, although already with a thick coat of fur. Their eyes open at around seven days, and the cubs can walk at five weeks and are fully weaned by 10 weeks. Also when they are born, they have full black spots which turn into rosettes as they grow to adolescence.

The cubs leave the den when they are around two to four months of age, but remain with their mother until they become independent after around 18–22 months. Once independent, they disperse over considerable distances, even crossing wide expanses of flat terrain to seek out new hunting grounds. 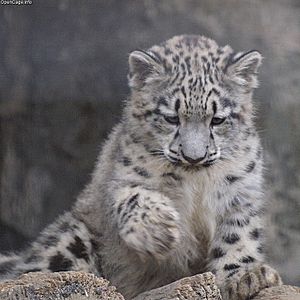 In 2008, there were approximately 600 snow leopards in zoos around the world. In the Richmond Metropolitan Zoo in Virginia, in the United States of America, snow leopard cubs were born in 2016.

Much progress has been made in securing the survival of the snow leopard, with them being successfully bred in captivity. Females usually give birth to two to three cubs in a litter, but can give birth to up to seven in some cases.

All content from Kiddle encyclopedia articles (including the article images and facts) can be freely used under Attribution-ShareAlike license, unless stated otherwise. Cite this article:
Snow leopard Facts for Kids. Kiddle Encyclopedia.