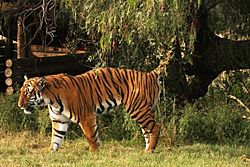 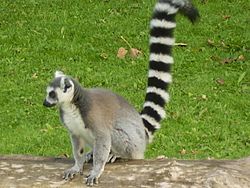 Ring-tailed lemurs hold their distinctive tails high in the air during territorial scent marking. They also engage in "stink fights" with intruding males. 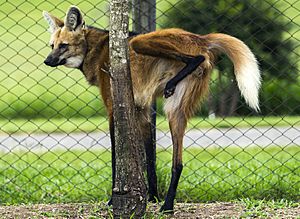 A maned wolf urinating on a tree to mark his territory

Scent marking, also known as territorial marking or spraying when this involves urination, is a behaviour used by animals to identify their territory.

They deposit strong-smelling substances contained in the urine, faeces, or, from specialised scent glands located on various areas of the body. Often, the scent contains pheromones or carrier proteins such as the major urinary proteins to stabilize the odours and maintain them for longer.

Felids such as leopards and jaguars mark by rubbing themselves against vegetation. Prosimians and New World monkeys also use scent marking to communicate. Many ungulates, for example the blue wildebeest, use scent marking from two glands, the preorbital gland and a scent gland in the hoof.

Territorial scent marking may involve behaviours specific to this activity. When a wolf marks its territory, it lifts a hind leg and urinates on a scent post (usually an elevated position like a tree, rock, or bush). This raised leg urination is different from normal urination, which is done while squatting.

Males and female ring-tailed lemurs scent-mark both vertical and horizontal surfaces at the overlaps in their home ranges using their anogenital scent glands. To do this, they perform a handstand to mark vertical surfaces, grasping the highest point with their feet while applying the scent.

In the Eastern carpenter bee, both sexes have glands that evolved for marking the nest. Males, although they have the gland, are unable to produce the marking substance. Females secrete it near the nest site entrance to establish their territory.

Wombats use feces to mark their territory. They have evolved specialized intestinal anatomy to produce cubical feces to ensure the feces do not roll away.

All content from Kiddle encyclopedia articles (including the article images and facts) can be freely used under Attribution-ShareAlike license, unless stated otherwise. Cite this article:
Spraying (animal behavior) Facts for Kids. Kiddle Encyclopedia.