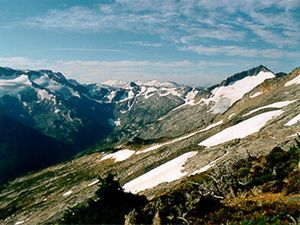 Alpine tundra is a type of geological terrain. It is to be found at high enough altitude at any latitude on Earth. Alpine tundra lacks trees. The lower parts do not have permafrost. Because of this they are generally better drained than permafrost soils. Alpine tundra changes to subalpine forests below the tree line.

Because alpine tundra is in many different widely separated regions of the Earth, there is no animal species found in all areas of alpine tundra.

Alpine tundra is very cold with summer temperatures on average below 10 °C. All types of tundra are classified as a desert.

Tundras are mainly found in northern areas such as Siberia and the north of Canada.

All content from Kiddle encyclopedia articles (including the article images and facts) can be freely used under Attribution-ShareAlike license, unless stated otherwise. Cite this article:
Alpine tundra Facts for Kids. Kiddle Encyclopedia.