The kea is a species of large parrot in the family Nestoridae found in the forested and alpine regions of the South Island of New Zealand. About 48 cm (19 in) long, it is mostly olive-green with a brilliant orange under its wings and has a large, narrow, curved, grey-brown upper beak. The kea is the world's only alpine parrot.

Now uncommon, the kea was once killed for bounty due to concerns by the sheep-farming community that it attacked livestock, especially sheep. In 1986, it received full protection under the Wildlife Act. Kea deaths due to traffic have prompted the NZ Transport Agency to install signs to help raise awareness, and to encourage people to slow down if necessary.

The kea nests in burrows or crevices among the roots of trees. Kea are known for their intelligence and curiosity, both vital to their survival in a harsh mountain environment. Kea can solve logical puzzles, such as pushing and pulling things in a certain order to get to food, and will work together to achieve a certain objective. They have been filmed preparing and using tools.

The kea was described by ornithologist John Gould in 1856. Its specific title, the Latin term notabilis, means "noteworthy". The common name kea is from Māori, probably because of their in-flight call – ‘keee aaa’.

Their are four species: the New Zealand kaka, the extinct Norfolk kaka, and the extinct Chatham kaka. All four are thought to stem from a "proto-kākā", dwelling in the forests of New Zealand five million years ago. Their closest relative is the flightless kakapo.

The kea's strong urge to explore and manipulate makes this bird both a pest for residents and an attraction for tourists. Called "the clown of the mountains", it will investigate backpacks, boots, skis, snowboards, and even cars, often causing damage or flying off with smaller items. Kea have been kept as pets before being protected, but rarely, since they were difficult to capture and destructive when in captivity.

People commonly encounter wild kea at South Island ski areas, where they are attracted by the prospect of food scraps. Their curiosity leads them to peck and carry away unguarded items of clothing, or to pry apart rubber parts of cars — to the entertainment and annoyance of human observers. 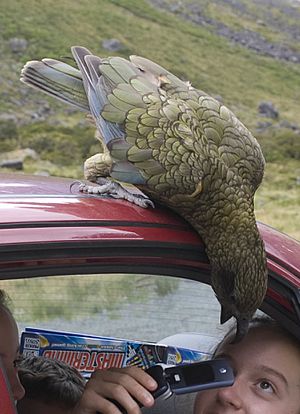 They are often described as "cheeky". A kea has even been reported to have made off with a tourist's passport while he was visiting Fiordland National Park.

Kea are social and live in groups of up to 13 birds. Isolated individuals do badly in captivity, but respond well to mirror images. The oldest known captive kea was 50 years old in 2008.

An omnivore, the kea feeds on more than 40 plant species, beetle larvae, other birds, and mammals (including sheep and rabbits). There are also reports of kea attacking dogs, and even horses. It has been observed breaking open shearwater nests to feed on the chicks. The kea has also taken advantage of human garbage and "gifts" of food. Some people believe that the unbalanced diet resulting from feeding kea human foods has a detrimental effect on the birds' health.

All content from Kiddle encyclopedia articles (including the article images and facts) can be freely used under Attribution-ShareAlike license, unless stated otherwise. Cite this article:
Kea Facts for Kids. Kiddle Encyclopedia.