The Norfolk kaka (Nestor productus) is an extinct species of large parrot, belonging to the parrot family Nestoridae. The birds were about 38 cm long, with mostly olive-brown upperparts, (reddish-)orange cheeks and throat, straw-coloured breast, thighs, rump and lower abdomen dark orange and a prominent beak. It inhabited the rocks and treetops of Norfolk Island and adjacent Phillip Island. It was a relative of the New Zealand kaka. 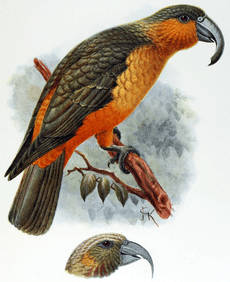 John Keulemans illustration of a bird from Norfolk Island, and the head of a Phillip Island specimen

The Norfolk kaka was first described by the naturalist Johann Reinhold Forster and his son Georg following the discovery of Norfolk Island by James Cook on 10 October 1774. The description was only published in 1844. Around 1790, John Hunter depicted a bird on a kangaroo apple (Solanum aviculare). The bird was formally described by John Gould in 1836, from a specimen at the Zoological Society of London. Originally, the individuals from Norfolk Island and Philip Island were considered two separate species, Nestor norfolcensis (described by August von Pelzeln in 1860) and Nestor productus, respectively, but direct comparison of specimens of both islands showed that they were the same species.

The Norfolk kaka was first described by John Gould in 1836 as Plyctolophus productus.

Little is known of the bird's biology. It was said to have lived both on the ground and in tall trees, feeding on flowering shrubs and trees. The call was described by Gould as "hoarse, quacking, inharmonious noise, sometimes resembling the barking of a dog".

The Polynesians who lived at the Island for some time before the arrival of the Europeans hunted the kākā for food before disappearing from the island around the 1600s. It was also hunted for food and trapped as a pet after the arrival of the first settlers in 1788. The species' population suffered heavily after a penal colony was maintained from 1788 to 1814, and again from 1825 to 1854. The species likely became extinct in the wild in the early nineteenth century some time during the period of this second penal colony. It was not recorded by Ensign Abel D. W. Best on either Norfolk or Phillip Island in his 1838/1839 diary entries. As Best collected specimens for ornithology, including the Norfolk parakeet (which he called "lories", being similar in shape), it is hard to accept that he would not have documented this much more attractive quarry, had the kākā still been present. The last bird in captivity died in London in 1851. 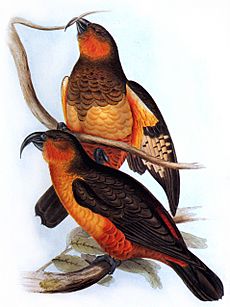 Forshaw has measurements of seven skins, one male, one female and five of unknown sex.

Naturalis in Leiden has 2 skins; one male (RMNH 110.061) and one female (RMNH 110.068). Both individuals originate from Philip Island. The male skin was acquired in 1863 long after the species' assumed disappearance, but it is unknown how it came to Leiden. It is more likely, given Phillip Island was already overrun with feral pigs, rabbits, goats and chicken in late 1838, that the 1863 specimen was purchased from another collection. The single unsexed individual from Philip Island at the Zoölogisch Museum (ZMA 3164) has been obtained before 1860, and originate probably from the same batch as the two specimens at Naturalis in Leiden. An old list of the specimens of birds present in the British Museum of Natural History list two individuals, both from Philip Island. One of the two specimens came from Bell's collection.

All content from Kiddle encyclopedia articles (including the article images and facts) can be freely used under Attribution-ShareAlike license, unless stated otherwise. Cite this article:
Norfolk kaka Facts for Kids. Kiddle Encyclopedia.