Museums Victoria is an organisation which operates three major state-owned museums in Melbourne, Victoria, the Melbourne Museum, the Immigration Museum and Scienceworks Museum. It also manages the Royal Exhibition Building and a storage facility in Melbourne's City of Moreland. 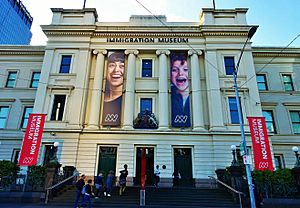 Exterior of the Immigration Museum, which occupies the former Melbourne Customs House 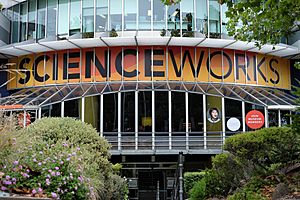 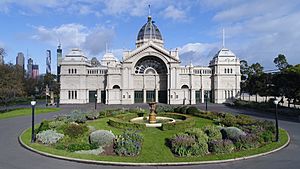 The Royal Exhibition Building, which is a World Heritage listed site

The museum traces its history back to the establishment of the "Museum of Natural and Economic Geology" by the Government of Victoria, William Blandowski and others in 1854.

Significant events in the Museum's history include:

The present chief executive officer of Museums Victoria is Lynley Crosswell (formerly Marshall), who was previously the head of the Australian Broadcasting Corporation’s international arm. Crosswell is the first woman to lead the organisation in its history.

The Museums Victoria Library collection was first established in the 1850s as a working collection for the Museum's curators, and has developed into one of the best collections of natural history books and journals in Australia. The library was located at Melbourne University until 1906 when it moved, with the museum, to be co-located with the Public Library.

Today, the library collection is located at Melbourne Museum and contains 40,000 titles, which includes around 1,000 titles that are considered to be rare due to one or a combination of factors, including: value; scarcity; aesthetic qualities; historic, scientific or institutional significance; fragility; or age. Collection strengths include natural history in the fields of zoology, geology and palaeontology, scientific expedition reports, society and institutional journal titles, Indigenous cultures of Australia and the Pacific, Australian history, technology, colonial and other exhibition catalogues, museum studies, and Museums Victoria publications.

All content from Kiddle encyclopedia articles (including the article images and facts) can be freely used under Attribution-ShareAlike license, unless stated otherwise. Cite this article:
Museums Victoria Facts for Kids. Kiddle Encyclopedia.