Melbourne Museum is a natural and cultural history museum located in the Carlton Gardens in Melbourne, Australia.

Located adjacent to the Royal Exhibition Building, it is the largest museum in the Southern Hemisphere. The museum was opened in 2000 as a project of the Government of Victoria, on behalf of Museums Victoria who administrates the venue.

Melbourne museum is a rich response to Melbourne's urban condition, and provides a place for education, history, culture and society to engage with each other in a contemporary setting. It is now an important part of Melbourne's soft infrastructure and is consistently ranked as one of the most popular museums and tourist attractions in Australia, winning 'Best Tourist Attraction' at the Australian Tourism Awards in 2011.

In addition to its galleries, the museum features spaces such as Curious?, which is a place to meet staff and find answers relating to the collections, research and behind-the-scenes work of Museums Victoria; as well as a cafe and a gift shop. The back-of-house areas are home to some of Museums Victoria's State Collections, which holds over 17 million items including objects relating to Indigenous Australian and Pacific Islander cultures, geology, historical studies, palaeontology, technology & society, and zoology, as well as a library collection that holds some of Australia's rarest and finest examples of 18th and 19th century scientific monographs and serials. The world's largest IMAX Theatre screen, which is also part of the museum complex, shows movies and documentary films in large-screen 3-D format.

The Melbourne Museum is a post-modernist building designed by Denton Corker Marshall Architects. Construction was managed by Baulderstone Hornibrook and completed in 2001, with the museum's official opening in 2000.

The building features a grid-like order that embraces eccentric metal clad forms extruding out and creating an irregular sculptural composition with moments of abstract colour throughout the building. The museum is arranged in an individual layout, referencing Melbourne's iconic Hoddle Grid, which allows the importance of each component of the buildings historical, cultural and social significance to be read in loosely equal hierarchy and individuality. The building can be dissected into different spaces so an individual can navigate through and around the building in an orthogonal manner. It is designed as both a single building and a network of individual buildings integrated into the landscape of the Carlton Gardens.

The museum is axially aligned with the adjacent Italianate Royal Exhibition Building and references it, along with the skyscrapers of Melbourne's central business district, with its monumental scale and protruding vertical facets. The sticks and blades that make up the Melbourne Museum are hallmarks of Denton Corker Marshall's architecture.

The most prominent element of the building are the two very long, very high, sloping canopies (or blades) that rise up from the centrally placed entrance opposite the north door of the Royal Exhibition Building; each act to guide visitors from the street into the Museum.

On the northern side of the building another larger blade-like roof rises up from the centre to the north, a landmark of similar scale to the central Florentine dome of the Royal Exhibition building.

Panoramic view of the outside of the Melbourne Museum featuring the Royal Exhibition Building on the right. 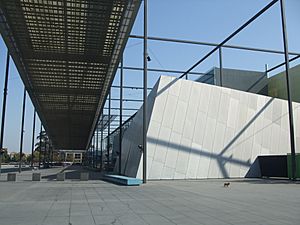 Denton Corker Marshall specialise in city planning and urban design, and mainly concern their practise with responding to social desires. The Melbourne Museum is situated in a precinct adjacent to a large local landmark within a large public park. Contrasted against the neo-classical Royal Exhibition centre, Denton Corker Marshall separates the two with an events plaza, yet connects them again underground with a car park, defining their motto "A new connection between the old, the new, past and future." Their approach to such a prominent part of Melbourne's historical and cultural infrastructure was to bring the past and existing exhibition building, into a new context and attempting to redefine a museums role as a public building. Denton Corker Marshall also envision the building to be just as responsive to its context as it is now, in the future. In a meeting place for community, the building itself acts as a community of different programs and meanings, combining to make a whole. In a wider context, the museum refers to Melbourne's city grid in its planning, and integrates the landscape of Carlton Gardens, housing a Forest Gallery which is situated within the building, and also providing areas of exterior circulation around the building. Formally the Melbourne Museum is motivated by sculpture. Denton Corker Marshall manipulates sculptural forms to meet the constraints of the buildings context and program. 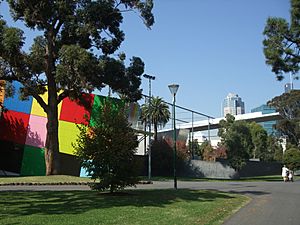 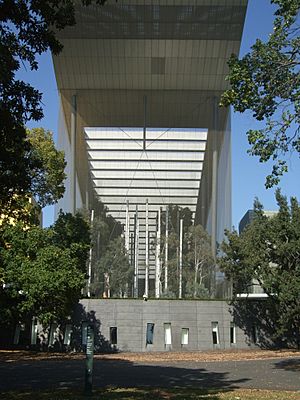 The museum had its earliest beginnings in the Government Assay Office which on 9 March 1854, opened some displays in La Trobe Street. In 1858, Prof. Frederick McCoy (Sir Frederick from 1891), who was Professor of Natural History at the University of Melbourne, was appointed Director of the National Museum.

Melbourne Museum was originally located (along with the State Library and the old state gallery) in the city block between La Trobe, Swanston, Little Lonsdale and Russell Streets - the nearby Museum underground railway station was originally named after it, although following the move the station was renamed Melbourne Central. The State Library now uses all the space in that building, the gallery also having moved to the NGV site in St Kilda Road.

The period in which the Victorian government was led by the Premier Sir Rupert Hamer (1972–1981) was one of policy development for museums in Victoria. Hamer's Arts Minister the Hon. Norman Lacy established a Museums Development Committee consisting of representatives of the Science Museum of Victoria, the National Museum of Victoria and the Ministry for the Arts. It considered such matters as the development of a single City Museum complex (leading eventually to the establishment of the new Melbourne Museum in Carlton) and programs in fields such as social history. The committee also joined with a working party of the Victorian Council of the Arts to develop a comprehensive museums policy for Victoria.[1] Lacy also began the establishment of the Heide Museum of Modern Art with the acquisition of the property Heide II (in Bulleen east of Melbourne) and a collection of 113 art works from John and Sunday Reed in August 1980. It was officially opened in November 1981. He also developed a proposal for a Museum of Social and Political History [2] at the Old Treasury Building for the Executive Committee of Victoria's 150th Anniversary Celebrations in July 1981 which led to the establishment of the City Museum.

The new Melbourne Museum next to the Exhibition Building in Carlton was constructed during the period of the Kennett government (1992–1999) was opened on 21 October 2000 by the Premier of Victoria at the time The Hon. Steve Bracks. The new Melbourne Museum included some significant changes to the historic methods of interpretation. One notable change was the inclusion of living organisms within the galleries. The centerpiece of the new building houses the Forest Gallery; a massive living and breathing exhibition offering a window into the tall forests of eastern Victoria. The Forest Gallery is home to the ongoing Forest Secrets exhibition which examines the agents of change within the forests. It includes hundreds of living plants and live animals such as birds, reptiles, amphibians and invertebrates. In 2004 Melbourne Museum took another unique step for an Australian museum and created the permanent Bugs Alive! exhibition. This ground breaking exhibition showcases the roles and life-cycles of the critically important animal group - the invertebrates. It features 50 living displays with an even greater number of species.

The new Melbourne Museum is located on the site of the former Melbourne Exhibition Speedway which operated from 5 November 1928 until 7 March 1936. The 413 yards (378 metres) dirt track speedway took place on a track laid out on the former sports oval and generally catered to motorcycle Solo and Sidecar racing and is considered to be the birthplace of Sidecar speedway racing. The inaugural Australian Sidecar Speedway Championship was staged there in 1931 and was won by Victorians Les Medlycott and "Tich" Jones. The Exhibition Speedway also hosted the Victorian Solo Championship from 1928/29 until 1934/35. 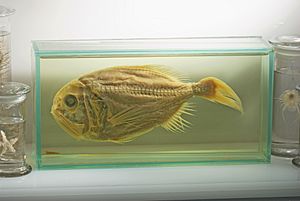 The main permanent exhibits include:

In 2010 an exhibit called 600 Million Years: Victoria Evolves opened, which includes some more prehistoric animals, all native to Victoria, such as:

An upcoming exhibit is one for a highly complete specimen of Triceratops, first acquired in 2020. The exhibit will occupy the space held by Wild, which closed on January 26, 2021, with the specimens going back into storage for maintenance.

Melbourne Museum was one of the venues of Festival Melbourne 2006, a citywide art festival held in conjunction of the 2006 Commonwealth Games, which was held in Melbourne. Among the exhibitions held in the museum were 'Common Goods:Cultures Meet Through Craft', which featured crafts made by artists from various Commonwealth countries and 'CARVE:Indigenous carving practices', a series of demonstrations of traditional indigenous carving practices and techniques from Australia, New Zealand and Canada.

Besides that, there was a producers' market, 'Victorian Producers' Market', where the best produces from regional Victoria such as wine, cheese and others were sold. A cooking competition, 'Culinary Pro Am of the Commonwealth' was also held between top Melbourne chefs, each representing a Commonwealth country.

Another crowd drawer was the large screen on museum grounds where live actions of the Games were shown.

The Melbourne Museum was one of Denton Corker Marshall's award-winning projects. One award in particular was the RACV Award for major tourist attraction, where it received 1,428,238 visitors during the years 2010–2011, which the Melbourne Museum received top honours for. In March 2012, the Qantas Australian Tourism Awards will be held in Cairns, where the Melbourne Museum will be represented for Victoria as a national level. Melbourne Museum's Science and Life gallery was honoured with the Large Permanent Exhibition Award due to its outstanding design and flow, among many other awards during 2010–2011. Their accomplishments have given them a place in numerous awards, being honoured for their high design quality throughout their international practises. They have received awards from the Royal Australian Institute of Architects (RAIA) that top any other firm, one of which was rated most prestigious and highest honour; of their contributions to Australian architecture.

All content from Kiddle encyclopedia articles (including the article images and facts) can be freely used under Attribution-ShareAlike license, unless stated otherwise. Cite this article:
Melbourne Museum Facts for Kids. Kiddle Encyclopedia.