The Carlton Gardens is a World Heritage Site located on the northeastern edge of the Central Business District in the suburb of Carlton, in Melbourne, Australia. A popular picnic and barbecue area, the heritage-listed Carlton Gardens are home to an array of wildlife, including brushtail possums.

The 26-hectare (64-acre) site contains the Royal Exhibition Building, Melbourne Museum and Imax Cinema, tennis courts and an award-winning children's playground. The rectangular site is bound by Victoria Street, Rathdowne Street, Carlton Street, and Nicholson Street. From the Exhibition building the gardens gently slope down to the southwest and northeast. According to the World Heritage listing the Royal Exhibition Buildings and Carlton Gardens are "of historical, architectural, aesthetic, social and scientific (botanical) significance to the State of Victoria."

The gardens are an example of Victorian landscape design with sweeping lawns and varied European and Australian tree plantings consisting of deciduous English oaks, White Poplar, plane trees, elms, conifers, cedars, turkey oaks, Araucarias and evergreens such as Moreton Bay figs, combined with flower beds of annuals and shrubs. A network of tree-lined paths provides formal avenues for highlighting the fountains and architecture of the Exhibition building. This includes the grand allee of plane trees that lead to the exhibition building. Two small ornamental lakes adorn the southern section of the park. The northern section contains the museum, tennis courts, maintenance depot and curator's cottage, and the children's playground designed as a Victorian maze. Dramatic tree-lined avenues, a majestic fountain, formal flowerbeds and miniature lakes are features of these late nineteenth century Gardens.

The listing in the Victorian Heritage Register says in part:

"The Carlton Gardens are of scientific (botanical) significance for their outstanding collection of plants, including conifers, palms, evergreen and deciduous trees, many of which have grown to an outstanding size and form. The elm avenues of Ulmus procera and Ulmus × hollandica are significant as few examples remain world wide due to Dutch elm disease. The Garden contains a rare specimen of Acmena ingens, only five other specimens are known, an uncommon Harpephyllum caffrum and the largest recorded in Victoria, Taxodium distichum, and outstanding specimens of Chamaecyparis funebris and Ficus macrophylla, south west of the Royal Exhibition Building."

The gardens contain three important fountains: the Exhibition Fountain, designed for the 1880 Exhibition by sculptor Joseph Hochgurtel; the French Fountain; and the Westgarth Drinking Fountain.

The grounds adjoining the north of the Exhibition Building formerly contained a sports ground, known as the Exhibition Oval or Exhibition Track. A fifth-of-a-mile oval asphalt cycling track was built in 1890, then was refurbished in 1896 to improve the surface and widen and bank the corners. The circuit held cycling races until the 1920s, as well as low-powered motorcycle races. The cycling track was removed in 1928, and replaced with a dirt track for high-powered motorcycle racing, which was growing in popularity at the time. A new seventh-of-a-mile banked oval board track was constructed in its place in 1936, but was removed in 1939 after the Supreme Court ruled that the track contravened the Exhibition Act, which required that the public have free access to the grounds; the track itself was moved to Napier Park, Essendon. Throughout its existence, the grassed oval in the middle of the racing tracks was used for various field sports events and carnivals, and at one point during a 1931 dispute between the Victorian Football League and its Grounds Management Association, the oval was on stand-by to serve as a VFL venue during the 1931 season. The gardens including the Exhibition Building and the fountains are now a popular spot for wedding photography. 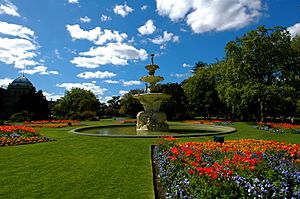 The Exhibition Building is still used for exhibitions, including for the annual Melbourne International Flower and Garden Show. The Melbourne Exhibition and Convention Centre, opened in 1996 at Southbank, provides more modern facilities and has become Melbourne's prime location for exhibitions and conventions.

All content from Kiddle encyclopedia articles (including the article images and facts) can be freely used under Attribution-ShareAlike license, unless stated otherwise. Cite this article:
Carlton Gardens Facts for Kids. Kiddle Encyclopedia.