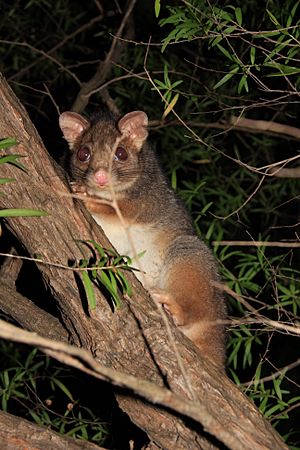 Ringtail Possum at night. Possums are often found in towns at night

The possum is an Australasian marsupial which was later introduced to China and New Zealand. There are about 69 species alive today.

Possums are members of the Phalangeriformes. This is a suborder of the Diprotodonts, a large order which includes the kangaroos and its relatives.

Possums are native to Australia and are protected there. Possums spend the first four months of their lives in their mother's pouch. By the time they are six months old, the young possums live outside the pouch.

They are nocturnal and at least partly arboreal. Some of the smaller species are gliders. They have sharp claws and a keen sense of smell. They eat the leaves of trees, insects, berries and bird's eggs.

The first possums were brought to New Zealand in 1837 from Australia. In New Zealand, possums have no natural enemies, so possum numbers increased quickly. It is thought of as a pest in New Zealand. The possum has done a lot of damage to the native plants, animals and birds.

All content from Kiddle encyclopedia articles (including the article images and facts) can be freely used under Attribution-ShareAlike license, unless stated otherwise. Cite this article:
Possum Facts for Kids. Kiddle Encyclopedia.