The State Library of Victoria is the main library of the state of Victoria, Australia. The library is in the capital city of Victoria, Melbourne. It is on Swanston Street, in the northern centre of the central business district. The library holds over 1.5 million books and 16,000 serials. Special books in the library include the diaries of the city's founders, John Batman and John Pascoe Fawkner, and Captain James Cook.

A view of the library, forecourt and lawns from Swanston Street

In 1853 the decision to build a state library was the idea of the Lieutenant-Governor Charles La Trobe and Sir Redmond Barry. A competition was held to choose a person to design the new building; local architect Joseph Reed, who later designed the Melbourne Town Hall and the Royal Exhibition Building, won the competition.

On 3 July 1854, the new Governor, Sir Charles Hotham, laid the foundation stone of both the new library and the University of Melbourne. The library opened in 1856, with a collection of 3,800 books chosen by Sir Redmond, the President of Trustees. Augustus H. Tulk, the first librarian, was started work three months after the opening.

Plans for the rebuilding were cut back as there was not enough money for the original design. A new building for the museum was built after World War 1, in a plain classical style.

The reading dome's original high windows were changed and covered in copper sheets in 1959 because water was getting into the building.

The library was also home to the State's Art Gallery and Museum until the National Gallery of Victoria moved to St Kilda Road in the late 1960s. The new Melbourne Museum was built in the Carlton Gardens in the 1990s.

The library underwent a lot of rebuilding between 1990 and 2004, designed by architects Ancher Mortlock & Woolley. The project cost about AU$200 million. The reading room closed in 1999 to allow for renovation, during which dome's windows were put back. The renamed La Trobe Reading Room reopened in 2003.

The rebuilt library includes a number of exhibition spaces which are used for the permanent exhibitions; The Mirror of the World: Books and Ideas and The Changing Face of Victoria. there is also a display from the Pictures Collection in the Cowen Gallery. The State Library of Victoria is one of the largest exhibiting libraries in the world.

The grassy lawn in front of the library's grand entrance on Swanston Street is a popular lunch-spot for the city's workers and students at the nearby RMIT University. When the library was built, there was a wooden picket fence around the building. In the 1870's a new wrought iron fence and gates were built. The space was opened when this fence was taken away in 1939.

A number of statues are in the entrance area:

On Sundays between 2.30pm and 5.30pm a speakers' forum takes place in front of the library, where people take turns in speaking on various subjects. 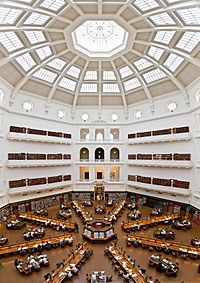 The landmark Domed Reading Room, which opened in 1913 and was designed by Norman G. Peebles. Its octagonal space was designed to hold over a million books and up to 500 readers. It is 34.75 m in both diameter and height, and its oculus is nearly 5 m wide. The dome was the largest of its type in the world on completion.

In 1965, the La Trobe Building was opened to hold the Library's collection of Australian items. This has now been moved into the La Trobe Reading Room.

The library has a large, world-class collection of books, periodicals, recordings and other materials about art, music and the performing arts.

The library has a chess room that houses a wide range of materials on the history, study and practice of chess. It contains a collection of items from the Anderson Chess Collection, one of the three largest public chess collections in the world. In addition to bookshelves containing a large range of books and magazines about chess, the room has game tables with chessboards and pieces. There are also glass cabinets with historical chess items. The room is meant for both reading, playing and studying.

Many of the library's electronic databases can be used from home to any Victorian who is a State Library User. Databases include the full Encyclopaedia Britannica; Oxford Reference dictionaries and encyclopaedias; multi-subject magazine and journal article databases; newspaper collections of most major Australian and international papers from 2000 onwards; and specialist subject databases.

All content from Kiddle encyclopedia articles (including the article images and facts) can be freely used under Attribution-ShareAlike license, unless stated otherwise. Cite this article:
State Library of Victoria Facts for Kids. Kiddle Encyclopedia.