John Batman (21 January 1801 – 6 May 1839) was an Australian grazier, entrepreneur and explorer. He settled in the north-east of the Van Diemen's Land Colony in the 1820s, and later as a leading member of the Port Phillip Association he led an expedition which explored the Port Phillip Bay area on the Australian mainland with a view to establishing a new settlement there.

He is best known for his role in the founding of the settlement on the Yarra River which became the city of Melbourne, eventual capital of the new Colony of Victoria, and one of Australia's largest and most important cities. When he found the current site of central Melbourne, he noted in his diary of 8 June 1835, "This will be the place for a village." and declared the land "Batmania".

The treaty Batman negotiated with local Aboriginal peoples in 1835, to acquire land in the Port Phillip area, was a matter of controversy in his day, and has remained an event of great historical interest and debate.

Batman offered tools, blankets and food in exchange for thousands of hectares of land stretching from Melbourne to Geelong, but the colonial government in New South Wales did not acknowledge the treaty. Although his proposed transaction was exploitative, Batman's treaty stands as the only attempt by a European to engage Australian Aboriginals in a treaty or transaction rather than simply claiming land outright. 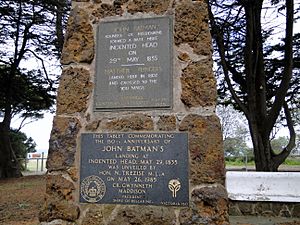 Detail of the inscription on the Matthew Flinders and John Batman memorial at Indented Head, Victoria, Australia

Batman's English parents, William and Mary Batman, came to Sydney in 1797 aboard the ship the Ganges. John was born in 1801 at Rosehill, Parramatta, now a suburb of Sydney, but at the time one of the early farming settlements of the fledgling colony.

In 1821 John and brother Henry journeyed to Van Diemen's Land (now known as Tasmania) to settle on land in the north-east near Ben Lomond.

In early 1826, Batman captured the notorious cannibal bushranger Thomas Jeffries and later on caught fellow bushranger Matthew Brady, resulting in an additional grant of land by the government.

Batman became a grazier. He participated in the capture of Tasmanian Aborigines in 1829. He employed mainland Aboriginal people hired in Sydney, New South Wales, for 'roving parties' hunting Tasmanian's. Between 1828 and 1830, aboriginal Tasmanian's in this region were shot or rounded up by bounty hunters like John Batman.

Batman rose to prominence during the time of the Black War of 1830, during which he participated in the Black Line – the formation of a "human chain" across the island to drive Tasmanian Aborigines from their lands into a 'manageable' area. 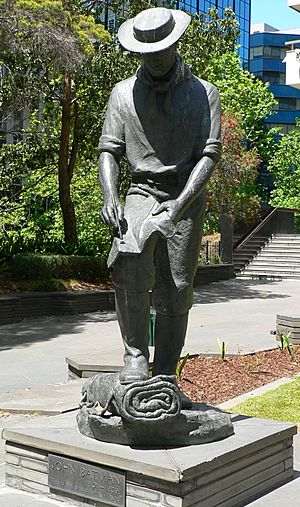 Batman and his family settled at what became known as Batman's Hill at the western end of Collins Street. He built a house at the base of the hill in April 1836. Batman's health quickly declined after 1835, and he became detached from his wife, convict Elizabeth Callaghan. They had had seven daughters and a son.

In his last months of his life Batman was cared for by the local Aboriginal people. On Batman's death on 6 May 1839, his widow and family moved from the house at Batman's Hill and the house was re-used by the government for administrative offices.

Batman was buried in the Old Melbourne Cemetery but was exhumed and re-buried in the Fawkner Cemetery, a cemetery named after his fellow colonist John Pascoe Fawkner. A bluestone obelisk was constructed in 1922 which was later moved to Batman Avenue before being returned to the Queen Victoria Market site in 1992. The obelisk is inscribed with the Latin "circumspice" meaning "look around", the entire city of Melbourne being his legacy. The obelisk also states that Melbourne was "unoccupied" prior to John Batman's arrival in 1835. 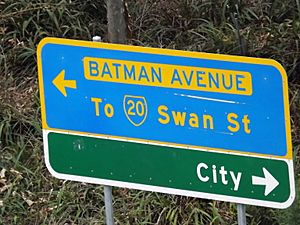 A roadsign for Batman Avenue in Melbourne 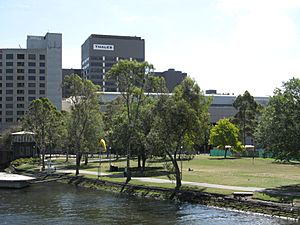 A view of Batman Park 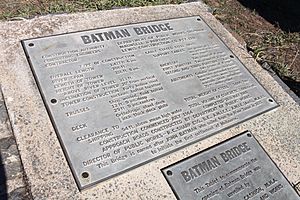 The Batman Bridge over the Tamar River in Tasmania 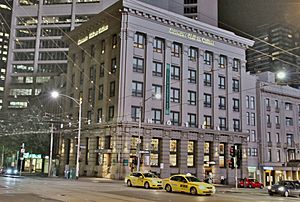 All content from Kiddle encyclopedia articles (including the article images and facts) can be freely used under Attribution-ShareAlike license, unless stated otherwise. Cite this article:
John Batman Facts for Kids. Kiddle Encyclopedia.