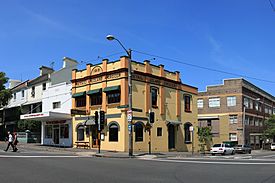 Surry Hills is an inner city, eastern suburb of Sydney, in the state of New South Wales, Australia. Surry Hills is immediately south-east of the Sydney central business district in the local government area of the City of Sydney. Surry Hills is surrounded by the suburbs of Darlinghurst to the north, Chippendale and Haymarket to the west, Moore Park and Paddington to the east and Redfern to the south.

The first land grants in Surry Hills were made in the 1790s. Major Joseph Foveaux received 105 acres (0.42 km2). His property was known as Surry Hills Farm, after the Surrey Hills in Surrey, England. Foveaux Street is named in his honour. Commissary John Palmer received 90 acres (360,000 m2). He called the property George Farm and in 1800 Palmer also bought Foveaux's farm. In 1792, the boundaries of the Sydney Cove settlement were established between the head of Cockle Bay to the head of Woolloomooloo Bay. West of the boundary, which included present-day Surry Hills, was considered suitable for farming and was granted to military officers and free settlers.

After Palmer's political failures, his reduced financial circumstances forced the first subdivision and sale of his estate in 1814. Isaac Nichols bought Allotment 20, comprising over 6 acres (24,000 m2). Due to the hilly terrain, much of the suburb was considered remote and 'inhospitable'. In the early years of the nineteenth century the area around what is now Prince Alfred Park was undeveloped land known as the Government Paddocks or Cleveland Paddocks. A few villas were built in the suburb in the late 1820s. The suburb remained one of contrasts for much of the nineteenth century, with the homes of wealthy merchants mixed with that of the commercial and working classes. 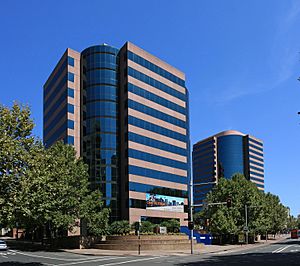 In 1820, Governor Macquarie ordered the consecration of the Devonshire Street Cemetery. A brick wall was erected before any interments took place to enclose its 4 acres (16,000 m2). Within a four-year period the cemetery was expanded by the addition of 7 acres (28,000 m2) to its south. A road was formed along the southern boundary of the cemetery in the first half of the 1830s and was called Devonshire Street. The Devonshire Street Cemetery, where many of the early settlers were buried, was later moved to build the Sydney railway terminus. Central railway station was opened on 4 August 1906. The area around Cleveland and Elizabeth streets was known as Strawberry Hills. Strawberry Hills post office was located at this intersection for many years.

In 1833, the Nichols estate was subdivided and sold. One purchase was by Thomas Broughton and subsequently acquired by George Hill who constructed Durham Hall on this and adjoining lots. Terrace houses and workers' cottages were built in Surry Hills from the 1850s. Light industry became established in the area, particularly in the rag trade (clothing industry). It became a working class suburb, predominately inhabited by Irish immigrants. The suburb developed a reputation for crime and vice. The Sydney underworld figure Kate Leigh (1881–1964), lived in Surry Hills for more than 80 years.

Surry Hills was favoured by newly arrived families after World War II when property values were low and accommodation was inexpensive. From the 1980s, the area was gentrified, with many of the area's older houses and building restored and many new upper middle-class residents enjoying the benefits of inner-city living. The suburb is now a haven for the upper middle class and young rich. 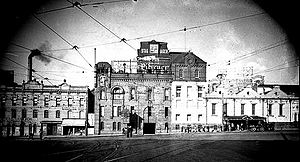 The West Kensington via Surry Hills Line operated from 1881 down Crown Street as far as Cleveland Street as a steam tramway. It was extended to Phillip Street in 1909, Todman Avenue in 1912, and then to its final terminus down Todman Avenue in 1937. When the line was fully operational it branched from the tramlines in Oxford Street and proceeded down Crown Street to Cleveland Street in Surry Hills, then south along Baptist Street to Phillip Street, where it swung left into Crescent Street before running south along Dowling Street. It passed the Dowling Street Depot, then tuned left into Todman Avenue, where it terminated at West Kensington. The line along Crown Street closed in 1957, the remainder stayed open until 1961 to allow access to Dowling Street Depot. Sydney Buses routes 301, 302 and 303 generally follow the route down Crown and Baptist Streets as far as Phillip Street.

Surry Hills has a mixture of residential, commercial and light industrial areas. It remains Sydney's main centre for fashion wholesale activities, particularly on the western side.

Surry Hills Markets are held in Shannon Reserve at the corner of Crown and Collins Streets, on the first Saturday of every month, and the Surry Hills Festival is an annual community event, attracting tens of thousands of visitors, held in and around Ward Park, Shannon Reserve, Crown Street and Hill Street. The Surry Hills Library and Community Centre sits opposite Shannon Reserve and houses the local branch of the city library and the Surry Hills Neighbourhood Centre. The building was "designed to achieve excellence in sustainable design and set new benchmarks in environmental performance" according to the City of Sydney website.

Central railway station, the largest station on the Sydney Trains and NSW TrainLink networks, sits on the western edge of Surry Hills. Surry Hills is also serviced by State Transit Authority buses. The Eastern Distributor is a major road, on the eastern edge of the suburb. Major thoroughfares are Crown Street, Cleveland Street, Bourke Street and Foveaux Street. Surry Hills is within easy walking distance of the Sydney CBD, and is included in a widening network of cycleways. 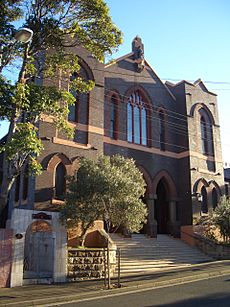 Surry Hills boasts a diverse range of cafes and restaurants serving a wide variety of cooking styles and cultures. The suburb has one of the highest, if not the highest, concentration of restaurants in Sydney. Local chefs include Andrew Cibej and Bill Granger.

Because of its industrial and commercial history, the Surry Hills area contains a significant number of pubs. The style of pubs range from the Victorian period to Federation and Art Deco pubs from the mid-1900s. Many of these have been refurbished in recent years to include restaurants and modern facilities. Some of the more popular pubs in Surry Hills include: 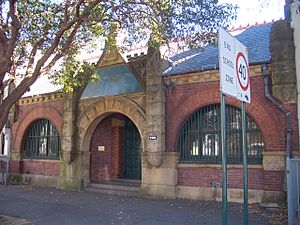 The following buildings are listed on the Register of the National Estate:

All content from Kiddle encyclopedia articles (including the article images and facts) can be freely used under Attribution-ShareAlike license, unless stated otherwise. Cite this article:
Surry Hills, New South Wales Facts for Kids. Kiddle Encyclopedia.