Paddington is an inner-city, eastern suburb of Sydney, in the state of New South Wales, Australia. Located 3 kilometres east of the Sydney central business district, Paddington lies across two local government areas. The portion south of Oxford Street lies within the City of Sydney, while the portion north of Oxford Street lies within the Municipality of Woollahra. It is often colloquially referred to as "Paddo".

Paddington is bordered to the west by Darlinghurst, to the east by Centennial Park and Woollahra, to the north by Edgecliff and Rushcutters Bay and to the south by Moore Park.

The suburb of Paddington is considered to be part of the region associated with the stories of the Cadigal people. These people belonged to the Dharug (or Eora) language group, which includes what is now known as the Sydney central business district. It is known that the ridge, being the most efficient route, on which Oxford Street was built was also a walking track used by Aboriginal people. Much of the Aboriginal population (estimated at the time to be ca. 1000 people) of Sydney died due to the smallpox outbreak of 1789, one year after the First Fleet arrived in Sydney. Some Anthropologists maintain that the tribe moved to other areas of the shared Eora language group. At the time when Robert Cooper began to build his first house in Paddington, approximately 200 Koori people were living in Woolloomooloo in housing which Governor Macquarie had built for them.

Paddington has never been a suburb with a dense indigenous population. In the 1930s, when parts of Sydney such as Redfern and Glebe became hubs for Aborigines entering the labour force, Paddington continued to be a European working-class suburb. 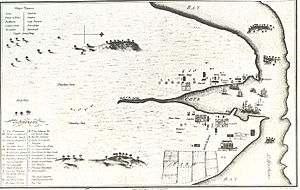 In 1788 the First Fleet arrived in Sydney Harbour and established a settlement in Sydney Cove. Three kilometres to the east lay the land that would become Paddington. With a high sandstone ridge, eroded by streams leading to a marshy rush-filled cove too sallow for ships, the area was ignored by the newcomers, except for collecting rushes for thatch.

On a path used by local Aboriginal people, a road of some form was built by Governor Hunter to South Head as early as 1803. Governor Macquarie upgraded the road in 1811 for strategic purposes to accommodate wheeled vehicles. The road was improved by Major Druitt in 1820 to give faster access to the signal station at South Head. It was also to give access to the salubrious villas built by the colony's emerging plutocracy. The road was renamed the Old South Head Road after construction of New South Head Road along the Harbour foreshore was begun in 1831.

The first land grant in the Paddington area, of 100 acres (40.4 hectares), was made to Robert Cooper, James Underwood, and Francis Ewen Forbes by Governor Brisbane in 1823, allowing them to commence work on the Sydney distillery at the eastern end of Glenmore Road. A mill was located at the end of Gordon Street and run by the Gordon family grinding wheat from the early 1830s. It remained a prominent feature of the local landscape as houses were built, and as wind power was replaced by steam.

Cooper built his mansion, Juniper Hall, on the South Head Road ridge while Underwood built his house on Glenmore Road, between today's Soudan Lane and the former distillery. The suburb's name came about when in October 1839 James Underwood subdivided 50 of his 97 acres. He called his subdivision the Paddington Estate after the London Borough of that name. It extended from Oxford Street down to present day Paddington Street. 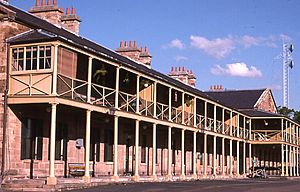 After the commencement in 1841 of Victoria Barracks the village of Paddington soon emerged, much of it around the cottages of the many artisans –stonemasons, quarrymen, carpenters and labourers – who were working on the construction of the Barracks. What emerged was a clear class distinction; the working-class located largely on or near the South Head Road and the emerging gentry living in villas facing the harbour in 'Rushcutters Valley'. 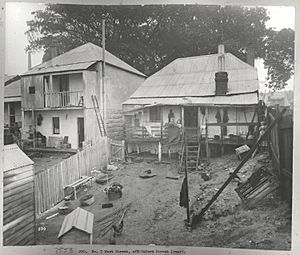 Cottages in West Street, off Oxford Street, at the time of the Bubonic Plague in Sydney c.1900

In the first decade of the twentieth century Paddington was in its prime, with the population reaching 26,000 living in 4,800 houses. General health improved with the area being sewered.

The First World War left a legacy of social problems, tensions and alcohol abuse. Paddington suffered death rates of 5 per 1000 residents in the influenza epidemic of 1919. Developers were disparaging about densely populated areas like Paddington, describing them as unhealthy, and promoting sanitised garden suburbs such as Haberfield. In Paddington the unskilled, those with a trade and those renting were hit hard during the Depression, with 30% unemployment.

The post-war County of Cumberland planning scheme for metropolitan Sydney slated Paddington as a slum ripe for total redevelopment. A 1947 map titled 'Paddington Replanning' proposed demolition of virtually all existing housing to be replaced by blocks of flats. However, with the newly arrived migrants from Europe finding Paddington affordable and a convenient place to live, slum clearance faded from the political agenda. In the 1960s, a middle class 'Bohemian' invasion began and Paddington became very 'muli-cultural'.

From 1960 many professional people, many who may have returned from living abroad, recognised Paddington's potential, particularly the suburb's close proximity to the CBD. With the restoration of often derelict houses there developed a new awareness and interest in the historical and aesthetic qualities of the area. In 1968 in a complete reversal of planning and housing orthodoxy at the time, four hundred acres of terrace housing was rezoned as the first conservation area in Australia. The resident action group, the Paddington Society, founded in 1964, was a catalyst in this development.

Paddington is a rare and largely intact example of an early Victorian residential suburb. Its unique qualities may be attributed to its close proximity to the city, the topography of its harbour location, the process of development and subdivision of early land grants, and the short period in the late l9thC in which it was largely built out.

The distinctly Australian 'terrace' evolved from earlier Georgian and Regency models to form an exceptionally cohesive dormitory suburb. The heritage conservation status of Paddington its streets and houses, its rooms and details is recognised as being of National and State significance.

With this conservation status comes an obligation for all generations to look after the place, in all its detail, so as to retain its cultural and heritage significance for future generations. We are but custodians of our heritage. Source: The Paddington Society

The aforementioned preservation of prominent Victorian architecture has drawn comparisons to London. In 1996, one travel journalist visiting Sydney for The New York Times noted, "in a city often said to look Californian–indeed, the 1920's California bungalow is a common type of suburban home–Paddington, also knownas Paddo, more closely resembles parts of London, particularly given the predominance of the London terrace". 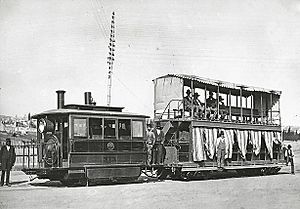 As part of Sydney's tramway network, two tram lines ran through Paddington, one along Oxford Street, the other through Five Ways. The Oxford Street line opened in 1884 as a steam tramway to Bondi. Electric services commenced on the same line in 1902. Both lines closed in 1960. 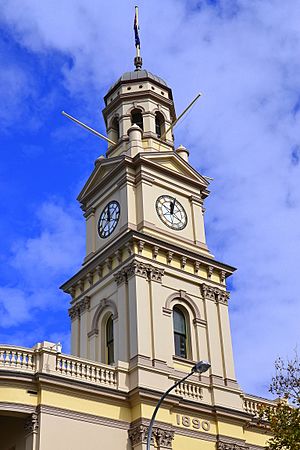 Sir Henry Parkes laid the foundation stone for the Paddington Town Hall in 1890 when Paddington was a separate municipality. It opened in 1891 and remains a distinctive example of Victorian architecture in Sydney. The clock tower is 32 metres high and being on the ridge of Oxford Street, dominates the skyline.

Whilst the eastern, southern, and western faces of the clock display the conventional Roman clock-face numerals, the Roman numerals on the northern (Oxford Street) side of the clock have been replaced as follows: 1:D, 2:U, 3:S, 4:T, 5:H, 6:E, 7:VII, 8:E, 9:D, 10:V, 11:A, 12:R. This was done to celebrate the coronation of King Edward VII; and, commencing at where the VIII ought to be, the northern clock-face reads E.D.V.A.R.D.U.S T.H.E VII.

The clock was officially set in motion on Wednesday, 30 August 1905, by Mr. J.H. Carruthers, the Premier of New South Wales, who mentioned in passing that "he thought that the day on which peace had been declared between Russia and Japan was a fitting time to set it in motion" and that "he hoped there would be peace and goodwill on earth as long as the clock continued to go".

The building now houses radio studios, a cinema, Paddington Library, and is a venue for private functions. Paddington Town Hall was the site of a meeting of Rugby League players in 1908, at which the Eastern Suburbs Rugby League club, now the Sydney Roosters, was officially formed. 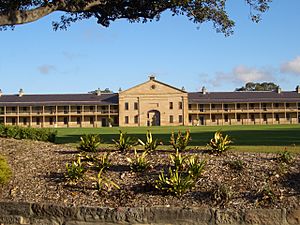 Victoria Barracks, constructed between 1841 and 1849, is one of the best-known examples of military architecture in Australia. The sandstone buildings were designed by Lieutenant-Colonel George Barney, who also built Fort Denison and reconstructed Circular Quay. Victoria Barracks, including the museum, is open to visitors on Thursdays from 10:00 a.m. to 1.00 p.m. 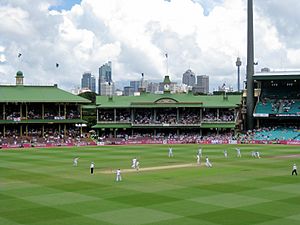 The Sydney Cricket Ground (SCG) can be accessed from Moore Park Road on Paddington's southern border. The first test match to be played at the SCG was in February 1882. The SCG is the home ground of the Sydney Swans Australian Rules Football club. Public tours are available every day except Sundays.

The Sydney Football Stadium (STC or Allianz Stadium) is on Moore Park Road on Paddington's southern border. It is the home ground of the Sydney Roosters, NSW Waratahs and Sydney FC, and can be seen best from the top of Oatley Road, just outside the Paddington Town Hall. 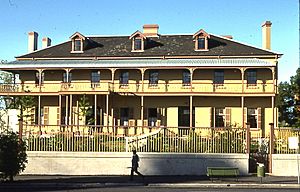 Juniper Hall was built by Robert Cooper, an ex-convict, in the 1820s and is the oldest house in Paddington. It is a large, dominating structure located diagonally opposite the Paddington Town Hall. It underwent significant restoration when owned by the National Trust of Australia. In 2013 the building was sold to the Moran family for the Moran Arts Foundation for exhibitions and events.

Oxford Street was originally used as an Aboriginal walking track, then as a faster route to South Head. Trams once ran along Oxford Street to Bondi and other beaches. Once serving the needs of the local residents, the street has changed to now serve the many visitors to Paddington who come to promenade and window shop. 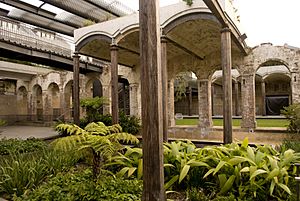 Trumper Park Oval, located at the corner of Glenmore Road & Hampden Street, is named in honour of Victor Trumper, a famous Australian test cricketer. The oval has a long history with the Australian Football East Sydney club, as well as with cricket and local athletics. A series of walking trails through a dense bushland gully connect to surrounding streets and lead to the Paddington Bowling Club and The Palms Tennis Centre.

The White City Tennis Centre has been a big part of Australian Tennis since its opening in 1922. The venue has played host to many events including the New South Wales Open, the Australian Open and the Davis Cup. The Centre Court Area is one of the few remaining natural grass courts in Australia that has the capacity to host major competitions. In 1954 a crowd of 25,000 watched the Davis Cup final, a record that still stands for any outdoor Davis Cup match played in Australia. 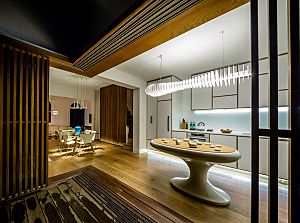 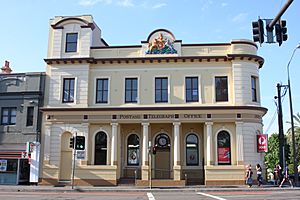 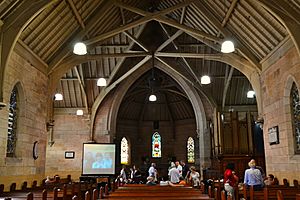 Places of worship in Paddington include: 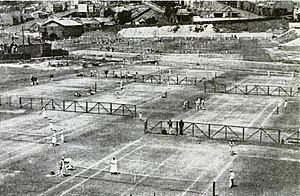 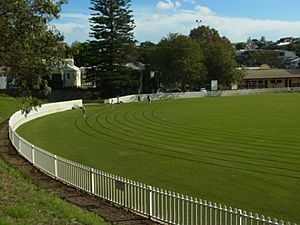 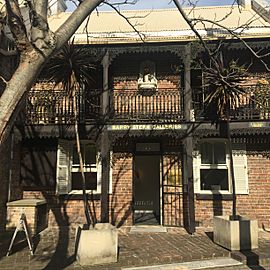 Numerous private art galleries are a feature of Paddington. They include:

The population of Paddington, at the 2011 census, was 12,134. The area had an above average level of foreign ancestry, with only 43% of people in the 2011 census identifying that their parents were born in Australia. 62% of people in the suburb live in semi-detached, row or terrace houses or townhouse (many typical Victorian terrace houses) and 31% lived in apartments. The suburb is a high-wealth area, with a medium weekly household income of $2,290 compared to the Australian average of $1,234.

All content from Kiddle encyclopedia articles (including the article images and facts) can be freely used under Attribution-ShareAlike license, unless stated otherwise. Cite this article:
Paddington, New South Wales Facts for Kids. Kiddle Encyclopedia.