Redfern is an inner-city suburb of Sydney located 3 kilometres south of the Sydney central business district and is part of the local government area of the City of Sydney. Strawberry Hills is a locality on the border with Surry Hills. The area experienced the process of gentrification and is subject to extensive redevelopment plans by the state government, to increase the population and reduce the concentration of poverty in the suburb and neighbouring Waterloo (see Redfern-Eveleigh-Darlington).

The suburb is named after surgeon William Redfern, who was granted 100 acres (0.40 km2) of land in this area in 1817 by Lachlan Macquarie. He built a country house on his property surrounded by flower and kitchen gardens. His neighbours were Captain Cleveland, an officer of the 73rd regiment, who built Cleveland House and John Baptist, who ran a nursery and seed business. Sydney's original railway terminus was built in Cleveland Paddocks and extended from Cleveland Street to Devonshire Street and west to Chippendale. The station's name was chosen to honour William Redfern. At that time, the present Redfern station was known as Eveleigh. When Central station was built further north on the site of the Devonshire Street cemetery, Eveleigh station became Redfern and Eveleigh was retained for the name of the railway workshops, south of the station. The remains of Cleveland Paddocks became Prince Alfred Park.

In August 1859, Redfern became a municipality of Sydney

Redfern has been characterised by migrant populations that have lived in the area. In the late 19th century many of the businessmen in the area were from Lebanon such as George Dan 1890, Stanton and Aziz Melick in 1888 and Shafiqah Shasha and Anthony and Simon Coorey in the 1890s. As waves of immigrants arrived in Australia, many made Redfern their first home.

On 17 January 1908 at Redfern Town Hall the South Sydney club was formed to compete in the first season of the New South Wales Rugby Football League Premiership.

The notorious Redfern Mail Exchange was built in 1965, after 300 people were evicted from their homes on the 2.15 hectare site. It became the scene of many industrial disputes when the automatic mail-sorting machinery which was supposed to sort efficiently, actually destroyed many letters. It became known as the Redfern Mangler.

The 2004 Redfern riots began on 14 February 2004, at the end of Eveleigh Street outside Redfern station, sparked by the death of Thomas 'TJ' Hickey. The teenager, riding on his bicycle, was allegedly being chased by a police vehicle, which led to his impalement on a fence. Members of his family were then reported to have started grieving for TJ around Eveleigh Street with a crowd gathering commiserating with the family. Fliers were distributed blaming police for TJ's death. The police closed the Eveleigh Street entrance to the railway station, but youths in the crowd became violent, throwing bricks and bottles; this escalated into a riot. A subsequent inquest found that although the police were following Hickey, they had not caused the accident, a verdict that caused controversy in Redfern's Aboriginal community. The riots sparked fresh debate into the welfare of Aboriginal Australians and the response of the police to those living in the Redfern area.

The population of the suburb spans a broad spectrum of socioeconomic characteristics. This may be partly due to the geography of the suburb, which is long, narrow, and centrally located. Redfern has become increasingly gentrified, with many medium and high density developments replacing low density and industrial developments. 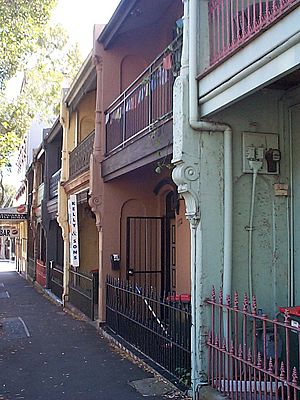 'The Block' is an area in the immediate vicinity of Redfern station bounded by Eveleigh, Caroline, Louis and Vine Streets. The Aboriginal Housing Company (AHC) was set up as the first urban Aboriginal community housing provider, using grant money to purchase the houses on the Block. As a result, the area is important to the Aboriginal community.

Eveleigh Street, which is part of 'The Block', is well known for its community. In 2004 much of the housing here was demolished with plans for redevelopment, but it is still an area around which many people congregate. The AHC's plans for redevelopment are known as the Pemulwuuy Project. The plans were approved in 2009.

The local police boys club (PCYC) has artwork painted on the outside walls of the building which was completed in the early 1990s. The front wall has a mural of a picture taken at Cleveland Street High School of a day when Dwayne "the D Train" McClain former Sydney Kings player visited the school. The picture has local sports stars such as Richard Bell, Bruce Swanson, Rossie Symmans, Nicholas Murray, Nathan Denzil,Jamie Sharpe, Lisa Mundine and Margaret Sutherland. The mural was painted by probably the most notable artist of the 90's in the Redfern district, Sir Joseph Phillips.

Redfern has many fine examples of Victorian terraced housing similar to other inner suburbs, such as Surry Hills and Paddington. Also, like some other inner-city suburbs, some parts of Redfern have been gentrified, whilst other areas still project an image of "mean streets", with some public housing.

A number of sporting teams represent the local area. The South Sydney Rabbitohs NRL club was formed at the Redfern Town Hall on 17 January 1908. One of the oldest Aboriginal rugby league teams in Australia, the Redfern All Blacks, play at Redfern Oval. The Redfern Raiders Soccer Club is a local Junior Soccer Club. Redfern Gym opened in 1985 and many boxing world champions have trained there.

Nikita Ridgeway established Australia's first indigenous hip-hop record label with her brother Stephen. Called Redfern Records, the label was named after the Sydney neighbourhood of Redfern they grew up in. 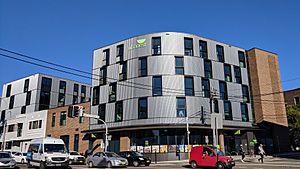 Redfern has broad sococioenomic characteristics. This may be partly due to the geography of the suburb, which is long, narrow and centrally located. Redfern has become increasingly gentrified, with many medium and high density developments replacing low density and industrial developments.

Redfern has been characterised by successive migrant populations. In the late 19th century, local businessmen George Dan in 1890, Stanton and Aziz Melick in 1888 and Shafiqah Shasha and Anthony and Simon Coorey in the 1890s were from Lebanon.

All content from Kiddle encyclopedia articles (including the article images and facts) can be freely used under Attribution-ShareAlike license, unless stated otherwise. Cite this article:
Redfern, New South Wales Facts for Kids. Kiddle Encyclopedia.