Alexandria is an inner-city suburb of Sydney, New South Wales, Australia. Alexandria is located 4 kilometres south of the Sydney central business district and is part of the local government area of the City of Sydney. The postcode is 2015.

The rough boundaries of Alexandria are Botany Road to the east, Gardeners Road to the south, Mitchell Road and Sydney Park to the west, and Boundary Road to the north. It is approximately 2 km south of Central station.

The Parish of Alexandria was established in 1835. The naming of Alexandria and neighbouring Waterloo, commemorates the famous British Empire military and naval victories over Napoleon. The Iron Duke Hotel in Alexandria, itself named after the heroic Duke of Wellington, as is Wellington Street in Waterloo. It was thought Alexandria may have been named after Princess Alexandra, Queen consort of King Edward VII however, Alexandra was born on 1 December 1844 and the parish's naming predates the birth of Alexandra by six years.

In 1868, the Borough of Alexandria was formed, after separating from Waterloo. The former Alexandria Town Hall is in Garden Street. Land for the building was acquired in 1879; the building was designed by Ferdinand Reuss Snr and completed in 1881. Major alterations took place over the years, right up to 1928. The building is listed on the State Heritage Register.

By 1943, Alexandria was the largest industrial district in Australia, and known as the "Birmingham of Australia", with everything from bricks to aeroplanes manufactured in 550 factories in just 1,000 acres (4.0 km2). The municipality was abolished upon merger into the City of Sydney in 1949, along with Darlington, Erskineville, Newtown, Redfern, Waterloo, Paddington and Glebe. 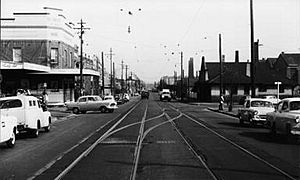 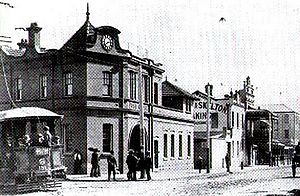 The former Alexandria tram line opened in 1902 as a single-track electric line that was duplicated in 1910. The line branched off from the Botany line at the junction of Henderson and Botany Roads in Alexandria. The line proceeded down Henderson Road then swung left into Mitchell Road. A Turn-back was provided at Ashmore Road (near Erskineville Oval) for short working. The line turned right into the present day Sydney Park Road (then known as an extension of Mitchell Road) before terminating at the junction with the Cook's River line at the Princes Highway near St Peters railway station. Services operated from Circular Quay in a route similar to the Botany line as far as the Henderson Road junction. The line was closed in 1959. Sydney Buses route 308 generally follows the route as far as St Peters station.

Alexandria is part of the Green Square district, in the north east of the suburb, which is undergoing gentrification. This involves an urban renewal project that is constructing modern retail, business and medium-high density residential developments.

Established in September 2009, its main purpose was to meet the community demand for local markets, providing fine produce and a venue for local handmade crafts. The children’s activities kept the little ones entertained with face painting and a kids zoo. It was open every Sunday 10am - 3pm at 75-85 O'Riordan St Alexandria however, it has unfortunately been temporarily closed.

Sydney Park is a large recreational area on the western border. Alexandria Park and McKell Playground are situated on Buckland Street. Tennis courts and a cricket oval are located here. Erskineville Oval is just over the western border. Erskineville Oval is the home ground of the Alexandria Rovers junior rugby league team. The Alexandria Dukes Rugby Football Club play in the New South Wales Suburban Rugby Union competition and will again contest the Meldrum Cup in 2014. The club rooms for the Dukes are at the Iron Duke Hotel.

A number of popular pubs are located in the suburb including the Alexandria Hotel (closed), Iron Duke Hotel, Buckland Hotel and the Parkview Hotel on Mitchell Road.

All content from Kiddle encyclopedia articles (including the article images and facts) can be freely used under Attribution-ShareAlike license, unless stated otherwise. Cite this article:
Alexandria, New South Wales Facts for Kids. Kiddle Encyclopedia.