Kids Encyclopedia Facts
This page is about the locality. For the racehorse, see Circular Quay (horse).

Circular Quay is a harbour, former working port and now international passenger shipping port, public piazza and tourism precinct, heritage area, and transport node located in Sydney, New South Wales, Australia on the northern edge of the Sydney central business district on Sydney Cove, between Bennelong Point and The Rocks. It is part of the local government area of the City of Sydney.

The Circular Quay area is a popular neighbourhood for tourism and consists of walkways, pedestrian malls, parks and restaurants. It hosts a number of ferry quays, bus stops, and a railway station. Often referred to as the "gateway to Sydney", the precinct has views of the Sydney Harbour Bridge and the Sydney Opera House and is a common location for viewing Sydney New Year's Eve fireworks. 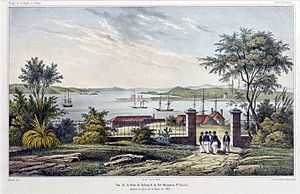 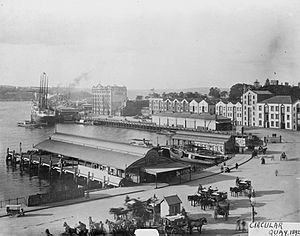 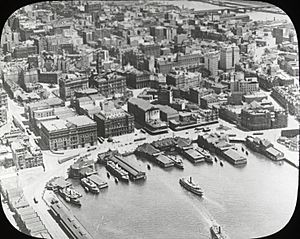 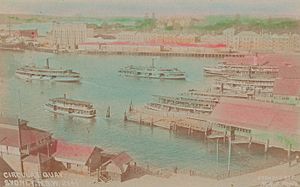 Sydney Cove, on which Circular Quay is located, was the site of the initial landing of the First Fleet in Port Jackson on 26 January 1788. The governor's temporary canvas house was erected on the east side of the cove, while the western shore became the centre of the early settlement. It was the focal point from which the city of Sydney grew. The first wharf on the shore of Sydney Cove probably dated from around 1792. In 1802 it was replaced with a timber framed wharf called "Hospital Wharf", the first public wharf of the colony (later renamed King's Wharf and Queen's Wharf).

Late 18th century Scottish constitutional reformer Thomas Muir was sentenced to transportation to Sydney for sedition, and had a cottage on what is now Circular Quay. Thomas Muir escaped from the colony in 1796 aboard an American brig, the Otter.

The eastern side of the cove remained largely uninhabited in the early years of the colony; one notable inhabitant was Bennelong, after whom the adjacent Bennelong Point and Bennelong Apartments are named. In the early 19th century, the entire eastern shore of Circular Quay was part of the Governor's Domain, though some commercial activity developed along the shoreline. The western shore, being adjacent to the original settlement now known as "the Rocks", was busier. Cadman's Cottage is a building which survives from that era, built in 1816 for the use of the governmental coxswains and their crews, it marks approximately the location of Circular Quay's natural western shore, prior to reconstruction. The Commissariat Stores (built in 1809) and Australia's first naval dock were also located on the western shore. The naval dockyard was expanded in 1818-1822 under Governor Macquarie, with four repairing docks.

Circular Quay was constructed in 1837-1844 by reconstructing the southern section of Sydney Cove with an artificial shoreline. The mouth of the Tank Stream, which flowed into Sydney Cove at the western end of Circular Quay, was in-filled. The harbour was originally known as "Semi-Circular Quay", this being the actual shape of the quay. The name was shortened for convenience. Wharves were built on the southern shore. Reflecting Circular Quay's status as the central harbour for Sydney, the Customs House was built on the southern shore in 1844-5. During the construction of Circular Quay the eastern side of the cove was used as a quarry and housed construction works. After the governor's residence was moved up the hill to the present Government House, in the 1840s and 1850s Macquarie Street was extended north through the Governor's Domain to Fort Macquarie. This led to the development of the area between the street and the shore into a commercial working wharf dominated by the wool trade, while the eastern side of the street remained part of the Domain. This part of Macquarie Street became known as the "wool store" end. Wool and bond stores and warehouses appeared on the site. The historic "Moor Steps" was built in 1868 as a passage between two wool stores, leading from the shore to Macquarie Street. By the 1860s, all three sides of Circular Quay were dominated by wharves and warehouses.

However, by the 1870s, much of the commercial shipping activities were moving away from Circular Quay. The harbour was becoming too small to accommodate the increasing number of large ships accessing Sydney. Instead, shipping activities moved further westwards to Darling Harbour, which also had the advantage of a railway line.

With commercial shipping moving out, the harbour became increasingly used for passenger transport. The first ferry wharf was built on the southern shore in 1879. From the 1890s, ferry terminals came to dominate the harbour, and Circular Quay became the hub of the Sydney ferry network. The Sydney Harbour Trust was formed in 1900.

From 1936, the appearance of Circular Quay was dramatically changed with the construction of a railway viaduct, and later the elevated Cahill Expressway above the viaduct, across the southern shore of the cove. The Circular Quay railway station was opened on 20 January 1956 and the elevated Cahill Expressway was officially opened on 24 March 1958.

The construction of the viaduct led to the demolition of the old Maritime Services Board building on the south-western shore. A grand, modernist replacement was constructed further north in 1940, and is today the Museum of Contemporary Art. Further north, the Sydney Cove Passenger Terminal was built in 1958-1960 to accommodate the increased number of passengers arriving by ship. The building was renovated in 1988, 2000 and 2014. Large liners and cruise ships often dock here, dominating cove.

Major redevelopment of East Circular Quay did not occur until the 1950s. Wool stores were demolished and replaced by a number of modernist commercial buildings lining the eastern side of Circular Quay. The height limit was increased from 150 feet to 915 feet in 1959, and Circular Quay soon became dominated by skyscrapers.

A number of Sydney's first skyscrapers were built around Circular Quay. The AMP Building on the southern shore was the tallest building Sydney when completed in 1962. In 1973 the Sydney Opera House was built at the northeastern end of Sydney Cove. Circular Quay increasingly became a tourist destination in its own right.

Between 1971 and 1989, Colonial Mutual Life acquired land along Circular Quay for a large scale development. The initial, highly controversial design, was revised after the intervention of Prime Minister Paul Keating. In return for reducing the height of the building and adding a colonnade to facilitate public access, the development was permitted to protrude further towards the foreshore, with the design finalised in 1992.

In 1994 the Anti-Wall Committee was formed to protect the Sydney Opera House from nearby urban development.

In 1997 the "Save East Circular Quay Committee" was convened by Tony Rodi and Paul Johnson, and chaired by Neville Gruzman, and later by Jack Mundey in the battle to stop the desecration of the Sydney Opera House Precinct.

"The desecration of East Circular Quay strikes at the nation's psyche ... Australia's most hated building must go.'" (Sydney architect Mr Tony Rodi, the convener of the Save East Circular Quay Committee, in Totaro P, smh_98.05.16) with Sydney's Majestic Gateway (Totaro P. Sydney Morning Herald) - again an alternative with the Botanic Gardens extended over the East Circular Quay site to Sydney Cove. Jack Mundey, Doug Sutherland, Lionel Todd, and Kell Hutchence, joined the battle, urged by an unprecedented public outcry against an apartment development (The Toaster), which has obliterated views of the Sydney Opera House from the main pedestrian approach.

The resulting development, Bennelong Apartments, dominates the eastern shore of Circular Quay and is highly controversial for its positioning, encroachment onto previously public space, and mediocre design quality. 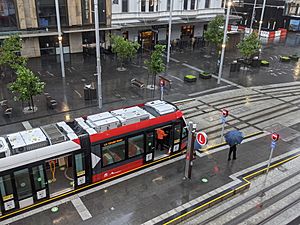 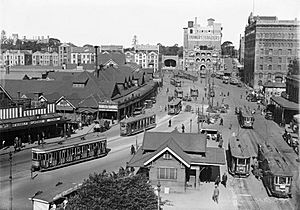 Circular Quay is a major Sydney transport hub, with a large ferry, rail and bus interchange. The Cahill Expressway is a prominent feature of the quay, running from the east, over the elevated railway station to join the Sydney Harbour Bridge in the west. International ships have docked and moored at Circular Quay since the earliest years of the colony. The Overseas Passenger Terminal is a major piece of Sydney transport infrastructure serving cruise ships and ocean liners and their passengers.

Circular Quay railway station is the only station on the City Circle that is above ground. The platform looks out over the ferry terminus, providing views of Sydney Harbour, including the bridge and Opera House.

The wharf complex hosts five commuter ferry wharves and is the terminus for all public ferry routes in Sydney Harbour and the Parramatta River other than the Mortlake Ferry between Mortlake and Putney. Circular Quay was formerly a large tram terminus and interchange. As many Sydney bus routes follow the previous tram lines, the tram terminus in Alfred Street became a major bus terminus for many bus routes. In March 1995, the road on the eastern side of Circular Quay which served as a bus layover was closed and converted into a pedestrian zone. A redesign of CBD bus services in October 2015 reduced the number of bus routes serving Circular Quay. In 2019, the CBD and South East Light Rail to Kingsford and Randwick opened with a terminus in Alfred Street. 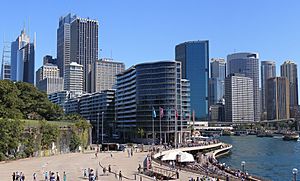 Circular Quay from the eastern side (2008)

Circular Quay is a focal point for community celebrations, due to its central Sydney location between the Sydney Opera House and the Sydney Harbour Bridge. It is one of the main congregation points for Sydney New Year's Eve.

Circular Quay is also the home of Sydney's Museum of Contemporary Art and the City of Sydney Library in the heritage-listed Customs House. In autumn 2006, the largest open-air art exhibition ever in Australia took place on Circular Quay: Over 7 weeks the Berlin Buddy Bears visited Sydney. Each bear represents a member-country of the United Nations, symbolizing the universal principles of peace, freedom and friendship.

The quay is mentioned in the song "And the Band Played Waltzing Matilda" (1971) by Eric Bogle.

All content from Kiddle encyclopedia articles (including the article images and facts) can be freely used under Attribution-ShareAlike license, unless stated otherwise. Cite this article:
Circular Quay Facts for Kids. Kiddle Encyclopedia.