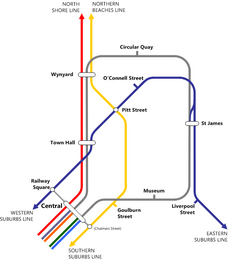 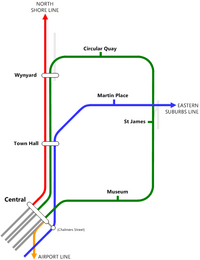 The original railway network for the Sydney CBD planned by John Bradfield, (left) and the network as it is today. The City Circle was built as planned and the Eastern Suburbs railway was built to a different alignment, though the Northern Beaches and Southern Suburbs line was never built.

The City Circle is a mostly-underground railway line located in the Sydney central business district and Haymarket, in New South Wales, Australia, that forms the core of Sydney's passenger rail network. The lines are owned by the Transport Asset Holding Entity, a State government agency, and operated under Transport for NSW's Sydney Trains brand. Despite its name, the City Circle is of a horseshoe shape, with trains operating in a U-shaped pattern. The constituent stations of the Circle are (clockwise): Central, Town Hall, Wynyard, Circular Quay, St James, Museum and back to Central. 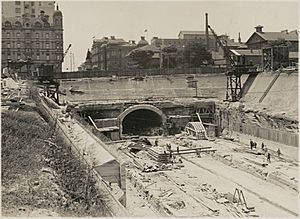 The original railway network for the Sydney CBD planned by John Bradfield, (left) and the network as it is today. The City Circle was built as planned and the Eastern Suburbs railway was built to a different alignment, though the Northern Beaches and Southern Suburbs line was never built.

The original concept for the City Railway was part of a report dated 1915 submitted to the government by John Bradfield upon his return from overseas study, with work commencing the following year. His concepts were largely based on the New York Subway, which he observed during his time in New York City.

The City Circle was built in stages. The first stations to open were Museum and St. James, which opened in 1926 as part of the initial electrification of Sydney railways. Next was the "western limb" through Town Hall and Wynyard, which opened in 1932 in conjunction with the opening of the Sydney Harbour Bridge. This section contains four tunnels. Two connected to the Harbour Bridge, while the two City Circle tunnels terminated at Wynyard. In 1956 the dead ends at St. James and Wynyard were joined and the "missing link", Circular Quay – was opened. Central and Circular Quay are above-ground stations (Circular Quay is elevated, directly underneath the Cahill Expressway), while the remainder are below ground. Several unused railway tunnels also exist. The former tram tunnels at Wynyard, and other stub tunnels at St James are well known.

Prior to the integration of the Eastern Suburbs line into the Illawarra Line in 1980, Illawarra line trains also operated around the City Circle.

Trains on the Western and Northern lines usually do not proceed around the City Circle but instead proceed across the Harbour Bridge to the North Shore line and vice versa. During weekend trackwork, trains from the City Circle may go to Penrith/Richmond, Cronulla/Waterfall or Epping/Hornsby via Strathfield.

In 2005, when CityRail completed its most recent estimate of station boardings, the City Circle accounted for 221,160 weekday entries and exits, equivalent to over 55 million annual trips.

It operates a service every 3 to 5 minutes during peak hours, 6 minutes at other times and 8 to 10 minutes on weekends.

All content from Kiddle encyclopedia articles (including the article images and facts) can be freely used under Attribution-ShareAlike license, unless stated otherwise. Cite this article:
City Circle Facts for Kids. Kiddle Encyclopedia.