Cadmans Cottage is the second oldest surviving residential building in Sydney, Australia, having been built in 1816 for the use of the governmental coxswains and their crews. The building is heavily steeped in the history of Sydney, also claiming the title as the first building to have been built on the shoreline of The Rocks area. It is claimed that during high tide, the water would come within 8 feet (2.4 m) of Cadmans Cottage; however, due to the reclamation of land during the building of Circular Quay, the waterline has moved about 100 metres away since 1816.

The building has had several different uses in its lifetime—first and foremost as the abode of the four governmental coxswains (from 1816 until 1845), the headquarters of the Sydney Water Police (from 1845 to 1864) and as the Sailor's Home (from 1865 to 1970). Restoration of Cadmans Cottage began in 1972 after it was proclaimed a Heritage site under the National Parks and Wildlife Act and control of the site was handed over to the Sydney Cove Redevelopment Authority.

A major archaeological investigation occurred in 1988 (in preparation for the bicentennial redevelopment) and since then, only minor maintenance works have been completed on the building. The building is now used as the home for the Sydney Harbour National Parks Information Centre and can be viewed by the public.

John Cadman was born in January 1758 and transported to Australia in 1798 at the age of 40 for the crime of stealing a horse. He was pardoned by Governor Macquarie in 1821. He is obviously the namesake of this building, and lived in it as the Superintendent of Boats, with his wife and two stepdaughters, from 1827 until his retirement in 1845, staying a total of 18 years, the longest time served by a governmental coxswain until the position was abolished after Cadman's retirement. 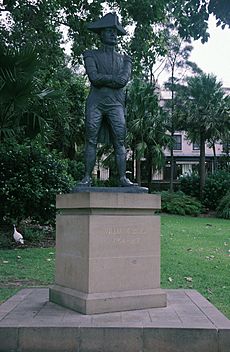 Cadmans Cottage is considered to have national significance to the Australian people as:

John Cadmans Cottage provides a unique insight into the early development of the Circular Quay area, although some of the heritage may have been lost during the 1972 restoration of the cottage.

All content from Kiddle encyclopedia articles (including the article images and facts) can be freely used under Attribution-ShareAlike license, unless stated otherwise. Cite this article:
Cadmans Cottage Facts for Kids. Kiddle Encyclopedia.