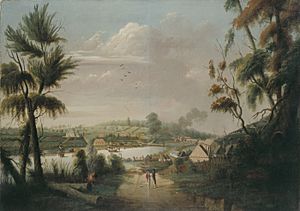 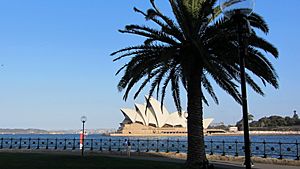 Sydney Cove is a small harbour in Sydney, New South Wales in Australia. When the Europeans arrived, they landed there. They arrived on the 26th of January, 1788. 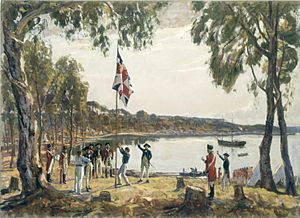 The Aboriginal name for Sydney Cove as recorded in a number of First Fleet journals, maps and vocabularies, was Warrane, also spelt as War-ran, Warrang and Wee-rong. This place is highly significant to both Aboriginal and non-Aboriginal people as a site of first contact between the Eora and the Berewalgal (meaning people from a distant place: the Europeans). Warrane was integral to the everyday lives of the Eora people. The men speared fish from the shoreline, while the women line-fished from their nowies (canoes).

Sydney Cove was named after the British Home Secretary, the 1st Baron Sydney (who was later created The 1st Viscount Sydney in 1789). It was the site chosen by Captain Arthur Phillip, RN between 21 and 23 January 1788 for the British penal settlement which is now the city of Sydney, and where possession of New South Wales was formally declared on 26 January (now commemorated as Australia Day). Today, the exact site where the flag was planted is unmarked, beneath buildings of Circular Quay.

Phillip's instructions were to establish the settlement at Botany Bay, a large bay further south of Sydney Cove which had been discovered by Lieutenant James Cook during his voyage of discovery in 1770, and was recommended by the eminent botanist Sir Joseph Banks, who had accompanied Cook, as a suitable site for a settlement. But Phillip discovered that Botany Bay offered neither a secure anchorage nor a reliable source of freshwater. Sydney Cove offered both of these, being serviced by a freshwater creek which was soon to be known as the Tank Stream.

It must have been like entering paradise on that summer afternoon when the sea-won convoy passed through the dun and barren headlands into the untouched harbour – the water brilliantly blue, the shores high and wooded without being precipitous, a scattering of islands, sandy beaches, the trees shimmering under the sun.

The site of the settlement was Sydney Cove. It was one of the smaller inlets, chosen because it had fresh water and good anchorage for ships close into the land. The Governor's working party had cleared a camping ground beside the creek, which stole silently along through a very thick wood, the stillness of which had then for the first time since the Creation, been interrupted by the rude sound of the labourer's axe.

Today the Tank Stream is encased in a concrete drain beneath the streets of the central business district and all native bushland has been cleared. The head of the cove is occupied by the Circular Quay ferry terminal. On Bennelong Point at the northern end of the eastern shore of the cove stands the Sydney Opera House. On the western shore is the historic district known as The Rocks. 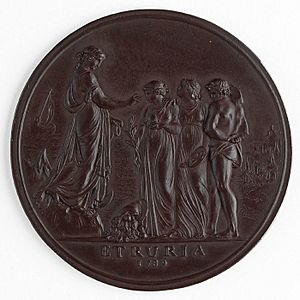 A sample of the dark grey clay of Sydney Cove was collected by Governor Phillip and given to Sir Joseph Banks, who gave it to pottery maker Josiah Wedgwood to test for suitability for making pottery. Wedgwood found it excellent and made a commemorative medal that became known as the Sydney Cove Medallion.

All content from Kiddle encyclopedia articles (including the article images and facts) can be freely used under Attribution-ShareAlike license, unless stated otherwise. Cite this article:
Sydney Cove Facts for Kids. Kiddle Encyclopedia.