Josiah Wedgwood (12 July 1730 – 3 January 1795) was an English potter and entrepreneur. He founded the Wedgwood company. He is credited with the industrialisation of the manufacture of pottery; "it was by intensifying the division of labour that Wedgwood brought about the reduction of cost which enabled his pottery to find markets in all parts of Britain, and also of Europe and America."

The renewed classical enthusiasms of the late 1760s and early 1770s were of major importance to his sales promotion. His expensive goods were in much demand from the nobility, while he used sales effects to market cheaper sets to the rest of society. Every new invention that Wedgwood produced – green glaze, cream-ware, black basalt and jasper – was quickly copied. Having once achieved perfection in production, he achieved perfection in sales and distribution. His showrooms in London gave the public the chance to see his complete range of tableware.

Meeting the demands of the consumer revolution and growth in wealth of the middle classes that helped drive the Industrial Revolution in Britain, Wedgwood is credited as the inventor of modern marketing. He pioneered direct mail, money back guarantees, travelling salesmen, carrying pattern boxes for display, self-service, free delivery, buy one get one free, and illustrated catalogues.

A prominent abolitionist, Wedgwood is remembered too for his "Am I Not a Man And a Brother?" anti-slavery medallion. He was a member of the Darwin–Wedgwood family, and he was the grandfather of Charles and Emma Darwin. 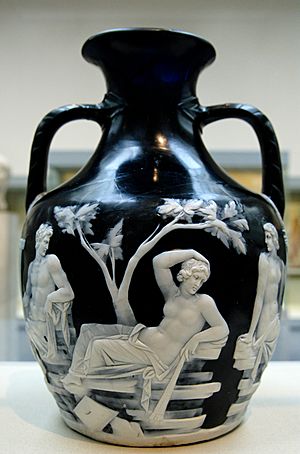 When he was a child, Josiah had smallpox, but he survived (did not die). The smallpox injured his knee, so he could not easily work as a potter. Instead, he worked hard to design pottery. Working as an apprentice, Wedgwood learned many techniques for making pottery. He used his skills to make one of the first pottery factories, Ivy Works, in Burslem, now part of Stoke-on-Trent.

Wedgwood was very interested in science and technology, and used new ideas to make good quality pottery. He became famous for making pottery for royalty, and became very rich. He spent money on civic works, things that would help businessmen and people in the city, for example canals.

By 1763, he was receiving orders from the highest levels of the British nobility, including Queen Charlotte. Wedgwood convinced her to let him name the line of pottery she had purchased "Queen's Ware". 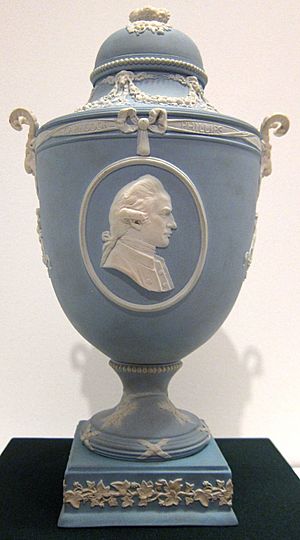 In 1773, Empress Catherine of Russia ordered the Green Frog Service from Wedgwood; it can still be seen in the Hermitage Museum. An even earlier commission from Catherine was the Husk Service (1770), now on exhibit in Peterhof.

In the latter part of his life, Wedgwood's obsession was to duplicate the Portland Vase, a dark blue and white glass vase from the first century BC. For three years he worked on the project, eventually producing what he considered a satisfactory copy in 1789.

Wedgwood died in Etruria, Stoke-on-Trent, in 1795.

He was elected to the Royal Society in 1783 for the development of a pyrometer, a device to measure the extremely high temperatures that are found in kilns during the firing of pottery.

He was an active member of the Lunar Society of Birmingham often held at Erasmus Darwin House and is remembered on the Moonstones in Birmingham.

All content from Kiddle encyclopedia articles (including the article images and facts) can be freely used under Attribution-ShareAlike license, unless stated otherwise. Cite this article:
Josiah Wedgwood Facts for Kids. Kiddle Encyclopedia.