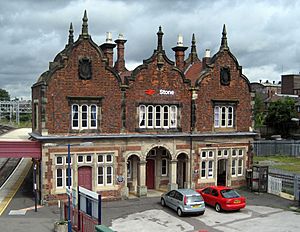 The largest city in Staffordshire is Stoke-on-Trent, which is administered separately from the rest of the county as an independent unitary authority. Lichfield also has city status, although this is a considerably smaller cathedral city. Major towns include Stafford (the county town), Burton upon Trent, Cannock, Newcastle-under-Lyme, Leek, and Tamworth. Smaller towns include Stone, Uttoxeter, and Rugeley, and large villages Eccleshall, Wombourne, Kinver, Penkridge, Tutbury and Stretton. Cannock Chase AONB is within the county as well as parts of the National Forest and the Peak District national park. 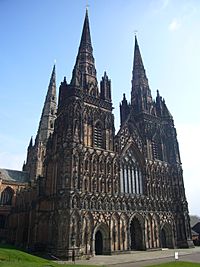 The historic boundaries of Staffordshire cover much of what is now the metropolitan county of West Midlands. An administrative county of Staffordshire was set up in 1889 under the Local Government Act 1888 covering the county except the county boroughs of Wolverhampton, Walsall, and West Bromwich in the south (the area known as the Black Country), and Hanley in the north. The Act also saw the towns of Tamworth (partly in Warwickshire) and Burton upon Trent (partly in Derbyshire) united entirely in Staffordshire.

In 1553 Queen Mary made Lichfield a county separate from the rest of Staffordshire. It remained so until 1888. 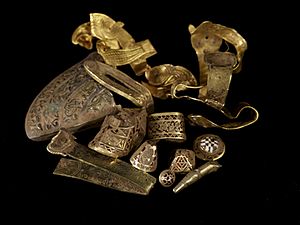 The Staffordshire Hoard, discovered in a field near Lichfield in July 2009, is perhaps the most important collection of Anglo-Saxon objects found in England

A significant boundary change occurred in 1926 when the east of Sedgley was transferred to Worcestershire to allow the construction of the new Priory Estate on land purchased by Dudley County Borough council.

Under the Local Government Act 1972, on 1 April 1974 the county boroughs of the Black Country and the Aldridge-Brownhills Urban District of Staffordshire became, along with Birmingham, Solihull, and Coventry and other districts, a new metropolitan county of West Midlands. County boroughs were abolished, with Stoke becoming a non-metropolitan district in Staffordshire, and Burton forming an unparished area in the district of East Staffordshire. On 1 April 1997, under a recommendation of the Banham Commission, Stoke-on-Trent became a unitary authority independent of Staffordshire once more.

In July 2009 the largest hoard of Anglo-Saxon gold ever found in Britain was discovered in a field near Lichfield. The artefacts, known as The Staffordshire Hoard have tentatively been dated to the 7th or 8th centuries, placing the origin of the items in the time of the Kingdom of Mercia. 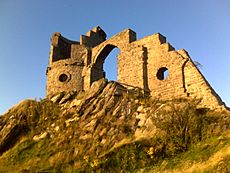 In the north and in the south, the county is hilly, with wild moorlands and uplands of the Peak District in the far north, and Cannock Chase an area of natural beauty in the south. In the middle regions, the landscape is low and undulating. Throughout the entire county there are vast and important coalfields. In the southern part, there are also rich iron ore deposits. The largest river is the Trent. The soil is chiefly clay and agriculture was not highly developed until the mechanisation of farms.

Some settlements which were historically part of the county now fall under the county of West Midlands (county):

A type of bull terrier called the Staffordshire Bull Terrier was bred for hunting purposes in this county. They are known affectionately as "staffs", "staffies", and "nanny-dogs". Staffies should not be confused with the considerably larger American Staffordshire Terrier, American Pit Bull Terrier, and (English) Bull Terrier.

The only Cathedral in the county is Lichfield Cathedral in the city of Lichfield. The Diocese of Lichfield covers the whole county with the exception of Stapenhill and Amington, the north of the nearby county of Shropshire and the Black Country area of the West Midlands. The county is covered by the archdeaconries of Stoke-upon-Trent and Lichfield. The current Bishop of Lichfield is Michael Ipgrave and the current Bishop of Stafford Geoff Annas. There are 298 Church of England Churches in the County.

Staffordshire is part of the Roman Catholic Archdiocese of Birmingham. The current Archbishop is Bernard Longley.

Primitive Methodism was founded in Staffordshire by Hugh Bourne, a native of Stoke-on-Trent, at a public gathering in the village of Mow Cop. He originally followed the Wesleyan form of Methodism but in 1801 he reformed the Methodist service by conducting it outside. By 1811 with his brother he founded the first chapel in the Tunstall area of Stoke-on-Trent.

The most popular Synagogue in the county is on London Road in Newcastle-Under-Lyme which opened in 2006 and replaced the former "Birch Terrace" Synagogue in Hanley according to the 2001 census there were 407 Jewish People in the non-metropolitan area of Staffordshire, and 83 in Stoke-on-Trent,

Staffordshire has an extensive network of canals including the Birmingham and Fazeley Canal, Caldon Canal, Coventry Canal, Shropshire Union Canal, Staffordshire and Worcestershire Canal and Trent and Mersey Canal.

The county is traversed primarily by the West Coast Main Line.

The county has relatively good links to the national roads network. Several major roads intersect the county, making it a popular location for commuters working in Birmingham.

The M42 has a junction in Tamworth at the south-east of the county, and heads south-west towards Birmingham. The M6 runs north through the county and junctions 10A-16 are in the county. The M6 Toll, the UK's first toll motorway, runs through the county with junctions in Weeford near Lichfield, Cannock and joins the M6 heading north towards Stafford.

The A5 and A34 run through the county. The former has been significantly widened to a dual carriageway at several sections, although much of it remains single carriageway.

There are currently no airports with scheduled flights in the county with the nearest ones being Birmingham, East Midlands and Manchester depending on the location there is however Wolverhampton Airport in Bobbington and Tatenhill Airfield near Burton-upon-Trent both of which are small airports catering for General Aviation.

All content from Kiddle encyclopedia articles (including the article images and facts) can be freely used under Attribution-ShareAlike license, unless stated otherwise. Cite this article:
Staffordshire Facts for Kids. Kiddle Encyclopedia.