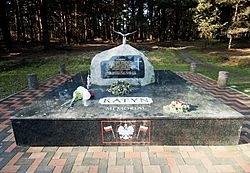 The Katyn Memorial at Cannock Chase

Cannock Chase is a woodland and mixed area of countryside in the county of Staffordshire, England. The area has been designated as the Cannock Chase Area of Outstanding Natural Beauty. The Chase gives its name to the local government district.

Cannock Chase is between Cannock, Lichfield, Rugeley and Stafford. It is a mixture of natural deciduous woodland, coniferous plantations, open heathland and the remains of early industry, such as coal mining.

Cannock Chase was made an Area of Outstanding Natural Beauty (AONB) on 16 September 1958. Much of the area is also a Site of Special Scientific Interest (SSSI). Despite its relatively small area, the chase has a remarkable variety of landscape and wildlife.

The wildlife includes a herd of about 800 fallow deer. There are a number of rare and endangered birds, like the migrant Nightjars. A feeding station attracts many species, including Brambling, Yellowhammer and Bullfinch.

Efforts are underway to increase the amount of heathland on the chase, reintroducing shrubs such as heather in some areas where bracken and birch forest have crowded out most other plants. The local flora also includes several species of Vaccinium, including the Cannock Chase Berry (Vaccinium ×intermedium Ruthe).

On the Chase's north-eastern edge can be found Shugborough Hall, ancestral home of the Earls of Lichfield. At its southern edge are the remains of Castle Ring, an Iron Age hill fort, which is the highest point on the Chase. Several glacial erratic boulders are also found on the Chase, remnants of glaciation. One is mounted on a plinth.

Since 2006, the forest has been used as an open-air music venue as part of the Forestry Commission nationwide Forest Tour, with acts such as The Zutons, The Feeling, Status Quo and Jools Holland playing in a forest clearing.

The landscape owes much to the underlying Triassic "bunter" formations. These are sandstone deposits containing rounded pebbles. They can be found in Warwickshire, Cheshire, Staffordshire, Nottinghamshire, Yorkshire, Devon and Dorset in England. They are thought to be alluvial deposits. Judging from the rounding of the mainly quartzite pebbles, they were carried for a long time in a large and turbulent river. The hard pebbles got powerful abrasion. The deposits in the English Midlands are thought to have been carried northwards from Brittany in northern France.

All content from Kiddle encyclopedia articles (including the article images and facts) can be freely used under Attribution-ShareAlike license, unless stated otherwise. Cite this article:
Cannock Chase Facts for Kids. Kiddle Encyclopedia.