Cannock is a town in the Cannock Chase district in the county of Staffordshire, England. It had a population of 29,018. Cannock is not far from the nearby towns of Walsall, Burntwood, Stafford and Telford. The cities of Lichfield and Wolverhampton are also nearby.

Cannock lies to the north of the West Midlands conurbation on the M6, A34 and A5 roads, and to the south of The Chase, an Area of Outstanding Natural Beauty (AONB). Cannock is served by a railway station on the Chase Line. The town comprises four district council electoral wards and the Cannock South ward includes the civil parish of Bridgtown, but the rest of Cannock is unparished.

Cannock was called Chenet in the Domesday Book of 1086. It was called Chnoc c.1130, Cnot in 1156, Canot in 1157, and Canoc in 1198. Cannock is probably Old English cnocc meaning 'hillock', modified by Norman pronunciation by the insertion of a vowel to Canoc. The name may refer to Shoal Hill, north-west of the town.

Cannock was a small rural community until mining increased heavily during the mid-to-late 19th century. The area then continued to grow rapidly with many industries coming to the area because of its proximity to the Black Country and its coal reserves. Cannock's population continued to increase steadily in the 20th century and its slight fall since the 1981 census has been more than compensated for by house-building in the adjoining village of Heath Hayes. The last colliery to close in the town was Mid Cannock in 1967, and the last remaining colliery to close in the Cannock Chase area was Littleton (in Huntington) in 1993. There is now no heavy industry in the area, and Cannock is home to many commuters working in the surrounding towns and cities.

Cannock Chase German war cemetery is located nearby containing 4,885 German military dead from the First and Second World Wars. It is managed by the Commonwealth War Graves Commission.

Cannock is on a south-west facing slope, falling from the highest point on Cannock Chase (244 m) at Castle Ring, to about 148 m in the town centre and 111 m near Wedges Mills. The soil is light with a gravel and clay subsoil, and there are extensive coal measures.

Cannock has a moderate, temperate climate. See Penkridge weather station for details of average temperature and rainfall figures taken between 1981 and 2010 at the Met Office weather station in Penkridge (around 5 miles (8 km) north-west of Cannock).

Cities and towns below are in upper case. Only a few of the nearest villages are shown.

Of people in employment aged 16 to 74, 13.5% worked in basic industries (ONS categories A, B, and D-F including 11.1% in construction), 14.2% in manufacturing, and 72.2% in service industries (ONS categories G-U including 19.5% in wholesale and retail trade and vehicle repair, 11.6% in health and social work, 7.4% in education, 6.2% in transport and storage, 5.8% in public administration, 5.6% in accommodation and catering, and 4.7% in administrative and support service activities). While 27.7% of households did not have access to a car or van, 76.1% of people in employment travelled to work by car or van.

75.5% of residents described their health as good or very good. The proportion who described themselves as White British was 95.6%, with all white ethnic groups making up 97.4% of the population. The ethnic make-up of the rest of the population was 1.0% mixed/multiple ethnic groups, 0.69% Indian/Pakistani/Bangladeshi, 0.34% Chinese, 0.17% other Asian, 0.35% Black and 0.065% other. 3.1% of Cannock's residents were born outside the United Kingdom. 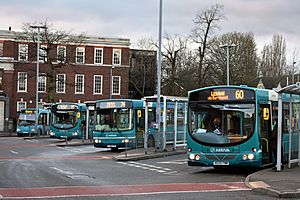 Cannock railway station closed in 1965 as part of the Beeching cuts but reopened in 1989. It is part of the Rugeley – Cannock – Walsall – Birmingham line operated by West Midlands Trains. Over the years, usage of this station, and the line overall, have increased to unprecedented levels. Services initially were hourly services between Birmingham New Street and Stafford (cut back to Rugeley Trent Valley in 2008). By 2013, usage had become significant enough to warrant electrification of the railway line, which was completed in 2019.

The Rugeley - Hednesford - Cannock - Walsall - Birmingham line operated by West Midlands Trains serves the three railway stations in the conurbation. These are at Hednesford, Cannock, and Landywood. There was also a service to Stafford on the Chase Line but this was cut back to Rugeley due to congestion on the West Coast Main Line.

In May 2019, West Midlands Trains began operating electric trains from this station. The vast majority of services are to Rugeley Trent Valley in the north, southbound trains operate to Birmingham International and London Euston. The journey time to Birmingham is around 36 minutes. On Sundays, trains operate as far south as Coventry.

D&G Bus operate the majority of bus services around Cannock from a depot at Delta Way under the Chaserider brand.

Arriva Midlands were previously the main operator around Cannock but their operations based at their Cannock depot were sold to D&G Bus during 2020.

No buses operate on Sunday or bank holiday.

Chase Grammar School (called Lyncroft House School 1980–1996 then Chase Academy until January 2013) is an independent co-educational boarding school with a day nursery and over 200 pupils up to age 19 including many international students.

South Staffordshire College closed its Cannock Campus in July 2017, but reopened it the following summer as the new Cannock Chase Skills and Innovation Hub with courses starting there from September 2018.

All content from Kiddle encyclopedia articles (including the article images and facts) can be freely used under Attribution-ShareAlike license, unless stated otherwise. Cite this article:
Cannock Facts for Kids. Kiddle Encyclopedia.