The M6 is the longest motorway in the United Kingdom. It is also one of the busiest motorways in the country. It is often referred to as "The Backbone of Britain". The M6 is part of the unsigned E-road E24 from the M1 to the M6 Toll near Birmingham. The E5 joins the M6 Toll from the M42 and then uses the M6 to its north end at Carlisle. Then it continues to become the M74. The motorway is 230 miles (370km) long. This is 37 miles longer than the M1 motorway. 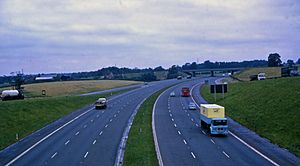 The first section of the motorway was the Preston by-pass, opened on 5 December 1958. It was built by a company called Tarmac Construction. It was the first motorway in the United Kingdom. It was opened by Prime Minister Harold Macmillan. The motorway was later extended in both directions.

Junction 6 in Birmingham has the name Spaghetti Junction. This is because it looks very complex from the sky.

On the high ground between Shap and Tebay, the north and south-bound carriages split apart. Strangely, at this point a local road runs between the two carriageways without a link to the motorway.

The section of the M6 which runs over Shap Fell in Cumbria is 1050 ft (320 m) above sea level. This is one of the highest points on any motorway in the UK. The West Coast Main Line railway follows the same course. It runs alongside the M6 for much of its length.

The motorway starts at the M1 in Rugby. It passes through Birmingham and Spaghetti Junction. The motorway continues to the north, passing Liverpool and Manchester. It goes around Preston and up to Lancaster. It then follows through a valley past the Lake District and Penrith. It finishes at Carlisle. 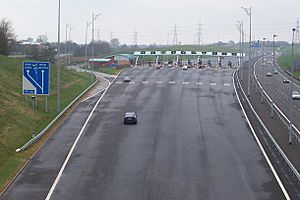 At the end of the M6 motorway at Carlisle, there is a 6-mile stretch of the A74 which links England to Scotland. This is called the Cumberland Gap. This was caused by an argument between the British Parliament and the Scottish Parliament, which left neither the M6 or the A74(M) being built. After a lot of controversy, building started on the remaining six miles. When it is completed, there will be a complete motorway going from London to Glasgow.

The M6 Toll is a toll road which was opened in 2003. It starts at Junction 11A and runs around Birmingham to Junction 3A. It is the first toll road to be built in the United Kingdom. It was opened on 9 December 2003. It is reported to save 45 minutes from the average journey.

All content from Kiddle encyclopedia articles (including the article images and facts) can be freely used under Attribution-ShareAlike license, unless stated otherwise. Cite this article:
M6 motorway Facts for Kids. Kiddle Encyclopedia.