Kids Encyclopedia Facts
This page is about the river in Cumbria and Lancashire, England. For other uses, see River Lune (disambiguation).

The River Lune (archaically sometimes Loyne) is a river 53 miles (85 km) in length in Cumbria and Lancashire, England.

Several elucidations for the origin of the name Lune exist. Firstly, it may be that the name is Brittonic in genesis and derived from *lǭn meaning "full, abundant", or "healthy, pure" (c.f. Old Irish slán, Welsh llawn). Secondly, Lune may represent Old English Ēa Lōn (ēa = "river") as a phonetic adaptation of a Romano-British name referring to a Romano-British god Ialonus who was worshipped in the area.

The river begins as a stream at Newbiggin, in the parish of Ravenstonedale, Cumbria, at St. Helen's Well (elevation of 238 metres above sea level) and some neighbouring springs. On the first two miles of its course, it is joined by four streams, two of them as short as itself, but two much longer. These are the Bessy Beck (short), the Dry Beck of 4.9 kilometres' (three miles) length at 0.32 miles (0.51 km) from St. Helen's Well, the Sandwath Beck (short) at 0.37 miles (0.60 km), and the Weasdale Beck (5.58 km = 3½ mls) at 1.6 miles from the well. Weasdale Beck is the uppermost headwater of River Lune recorded in Environment Agency's Catchment Data Explorer.

It then passes the remnants of a Roman fort near Low Borrowbridge at the foot of Borrowdale, and flows through south Cumbria, meeting the Irish Sea at Plover Scar near Lancaster, after a total journey of about 53 miles (85 km).

The valley of the Lune has three parts. The northern part between its source and Tebay is called Lunesdale. Below this is the spectacular Lune Gorge through which both the M6 motorway and the West Coast Main Railway Line run. Below the gorge, the valley broadens out into Lonsdale.

Bridges over the Lune include the Devil's Bridge near Kirkby Lonsdale and the Lune Millennium Bridge in Lancaster. At Caton, about 5 miles (8 km) upstream from Lancaster, there is a cluster of three bridges (one stone road bridge and two disused iron rail bridges now used as foot/cyclepaths) at the Crook o' Lune. Here in a 180-degree right-hand bend the Lune turns back on itself; this is followed by a 90-degree left-hand bend forming the shape of a shepherd's crook and creating a beauty spot which was painted by J. M. W. Turner. The M6 motorway crosses the Lune near Tebay and Halton-on-Lune; in 2015 it was joined by the Heysham to M6 Link Road. The Ingleton branch line, a railway operational between 1861 and 1967, followed the Lune between Tebay and Kirkby Lonsdale, crossing the river twice on viaducts which still stand. 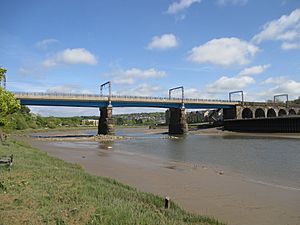 Carlisle Bridge over the Lune at Lancaster

Near the end of the non-tidal reach of the river stands the Lune Aqueduct, which carries the Lancaster Canal. The Lune is now tidal only below Skerton Weir in Lancaster. Four bridges in close proximity cross the estuary in Lancaster: Skerton Bridge (road), Greyhound Bridge (built as rail but now carries a road), Lune Millennium Bridge (pedestrian and cycle) and Carlisle Bridge (carrying the West Coast Main Line railway, and with a public walkway on the eastern side) which is the furthest downstream of the bridges.

This part of the Lune is also the site of the old Port of Lancaster, probably a port from Roman times; the Lancaster Port Commission was established in 1750 to improve navigation on the estuary. Between 1750 and 1767, St George's Quay and New Quay were built in Lancaster and in 1779 the port facilities were extended closer to the Irish Sea at Glasson Dock. In 1847 the Commissioners built a pair of lighthouses near Cockersand Abbey to help guide ships into the port. The lower lighthouse, known as the Plover Scar Lighthouse, (sometimes called Abbey lighthouse) still stands on Plover Scar, and it remains operational. The old high light, a square wooden tower, was demolished in 1954; but the former keepers' cottage, built alongside the high light, can still be seen.

Lancaster (and hence also Lancashire) is named after the Lune. The name of the ancient hundred of Lonsdale is also derived from the river. The river is a County Biological Heritage Site.

An engraving entitled 'The Vale of Lonsdale' appears in Fisher's Drawing Room Scrap Book, 1832 together with a poetical illustration by Letitia Elizabeth Landon. The plate shows Ingleborough in the background.

Jane Edmondson original title for Quaker Pioneers in Russia was "From the Lune to the Neva" ie from the Lune river where her parents (George & Anne Edmondson) came from, to the River Neva, in St Petersburg where she was born as part of the Quaker experiment by Daniel Wheeler who went with 32 Quakers to St Petersburg at the request of Emperor Alexander I, in order to drain the marshes so that the then capital of Russia could expand. Publication date 1902 Religious Society of Friends, Publisher London, Headley Bros. 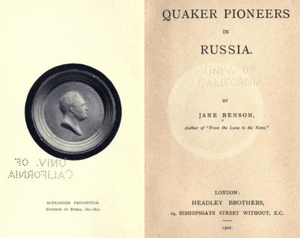 All content from Kiddle encyclopedia articles (including the article images and facts) can be freely used under Attribution-ShareAlike license, unless stated otherwise. Cite this article:
River Lune Facts for Kids. Kiddle Encyclopedia.