City of Lancaster facts for kids

Kids Encyclopedia Facts
This page is about the local government district in Lancashire, England, formed in 1974. For the ancient city itself,, see Lancaster, Lancashire. For other cities named Lancaster, see Lancaster (disambiguation).

The City of Lancaster (/ˈlæŋkæstər/) is a local government district of Lancashire, England, with the status of a city and non-metropolitan district. It is named after its largest settlement, Lancaster, but covers a far larger area, which includes the towns of Morecambe, Heysham, and Carnforth, as well as outlying villages, farms, rural hinterland and (since 1 August 2016) a section of the Yorkshire Dales National Park. The district has a population of (mid-2015 est.), and an area of 222.4 square miles (575.9 km2).

The current city boundaries were set as part of the provisions of the Local Government Act 1972, and cover an amalgamation of five former local government districts—the municipal boroughs of Lancaster and Morecambe and Heysham, together with the Carnforth Urban District and rural districts of Lancaster and Lunesdale, all from the administrative county of Lancashire.

The population density was 233/km2 (600/sq mi) and for every 100 females, there were 91.8 males. Of those aged 16–74 in Lancaster, 26.7% had no academic qualifications, lower than 28.9% in all of England. The city of Lancaster had a higher proportion of white people than Lancashire and England.

The table below details the population change since 1801, including the percentage change since the last available census data. Although the City of Lancaster has existed as a district since 1974, figures have been generated by combining data from the towns, villages, and civil parishes that would later be constituent parts of the city. 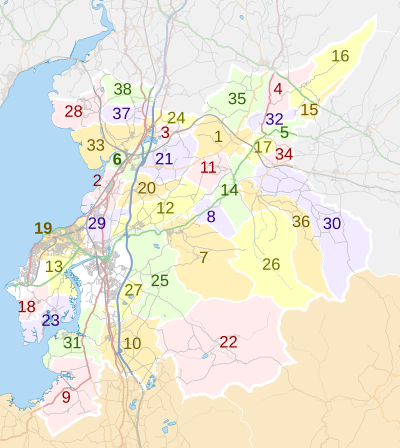 All content from Kiddle encyclopedia articles (including the article images and facts) can be freely used under Attribution-ShareAlike license, unless stated otherwise. Cite this article:
City of Lancaster Facts for Kids. Kiddle Encyclopedia.