Kids Encyclopedia Facts
This page is about the town in England. For the community in the United States, see Carnforth, Iowa. For other uses, see Carnforth (disambiguation).

Carnforth is a market town and civil parish in the City of Lancaster in Lancashire, England, situated at the north east end of Morecambe Bay. The parish of Carnforth had a population of 5,560 in the 2011 census, an increase from the 5,350 recorded in the 2001 census.

Carnforth grew in the 19th century through the presence of the railway and iron works. Due to the closeness of the coast and the hills, Carnforth is a popular base for walkers and cyclists exploring the area. The River Keer, the West Coast Main Line (WCML), the A6 and the Lancaster Canal pass through the town. The M6 motorway passes just to the east, linked to Carnforth by the A601(M).

The name "Carnforth" is thought to derive from its old function as a ford of the River Keer on which it is situated. Over time the descriptive name "Keer-ford" may have morphed into the modern "Carnforth". An alternative explanation is that the name derives from 'Chreneforde' and is Anglo-Saxon in origin, as cited in the Victoria County History of Lancashire.

Much of the history of Carnforth revolves around the railway and ironworks. Vast deposits of limestone located locally made Carnforth an ideal place for an ironworks, as limestone is a key component of the smelting process. In 1846 the Carnforth Ironworks Company established a works, located near the railway station. In the same year a recession occurred in the Earl of Dudley ironworks in Worcestershire, this meant there was a surplus of workers. A number of workers moved to the ironworks and lived in the nearby company village of Dudley (now called Millhead). In 1864 the Carnforth Haematite Company took over the works and production was vastly increased due to iron ore that was brought in by rail from the Furness Peninsula. By 1872 steel production became the main focus for the works using the new Bessemer process. By 1889 this process had failed. Iron production continued at the works until 1929 when it eventually closed down. The site was taken over by the War Department as an ordnance depot and remained as such until the 1960s. From then to the present the site is now an industrial estate consisting of several businesses.

In the 19th century, Carnforth grew from a small village into a railway town when it became the junction of three major railways. With the closure of Carnforth MPD in 1968, the railway station facilities were reduced – the main line platforms were closed in May 1970 and subsequently removed when the line was electrified two years later. As a result no express services on the West Coast Main Line (WCML) call at the town. The railway station is nowadays served by trains from Lancaster to Barrow and to Leeds.

An important motive power depot was located to the west of the WCML and was one of the last to retain an allocation of steam locomotives until mid-1968. The buildings are now occupied by the West Coast Railway Company who still maintain and overhaul steam locos in their premises. The concrete locomotive coaling tower is a rare survivor.

From the 1920s to the 1980s Morphy's Mill, in Oxford Street, was a major employer of women in Carnforth. Contrary to its name it was not a mill but a factory making blouses and other garments.

In October 2016, the town council announced the replacement of the vacuum cleaner in Carnforth Civic Hall.

In 1945, Carnforth railway station was used as a set for the David Lean film Brief Encounter, starring Celia Johnson and Trevor Howard. Fans of this film were one of the major factors in the recent refurbishment of the railway station, including construction of a refreshment room to match the studio set used in the film, which is now run by the Carnforth Station Trust.

The town is home to a rugby club 'Carnforth RUFC', a football team 'Carnforth Rangers' and the Carnforth cricket club.

There is also a small public library within the town. 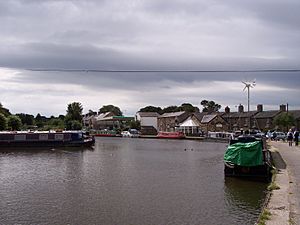 The Lancaster Canal at Carnforth

Carnforth lies on the A6 road, which is served by buses southwards to Lancaster and Morecambe and northwards to Milnthorpe, Kendal and Keswick, including the 555 bus, described as one of the longest and most scenic bus routes in England. The M6 motorway passes to the east of the town, and its junction 35 is on the outsikrts of Carnforth, connected by either the A601(M) motorway or the B6254 road.

The West Coast Main Line railway from London to Scotland passes through Carnforth railway station but the trains do not stop there: passengers must travel south to Lancaster or north to Oxenhoime for connections to that line. Trains from Carnforth serve the Leeds–Morecambe line and the Furness line.

The Lancaster Canal passes through Carnforth; there is a marina for pleasure boats. Historically the canal connected Lancaster to Kendal, but it is now closed beyond Tewitfield, north of Carnforth.

Both the Lancashire Coastal Way and the Bay Cycle Way skirt the western side of Carnforth, crossing the River Keer by the footbridge north west of the town.

The birthplace of Rugby League player Robert Wilson, born in the first quarter of 1879 and died in 1916.

Wealthy English merchant, Sheriff of London and builder of Hengrave Hall, Sir Thomas Kitson who was born in 1485 and died in 1540 was born in Warton/Carnforth.

Adam Thistlethwaite, born in 1988, is from Carnforth, and is a member of the band 'Massive Wagons'

All content from Kiddle encyclopedia articles (including the article images and facts) can be freely used under Attribution-ShareAlike license, unless stated otherwise. Cite this article:
Carnforth Facts for Kids. Kiddle Encyclopedia.