Kids Encyclopedia Facts
This page is about the town. For the surname, see Garstang (surname). 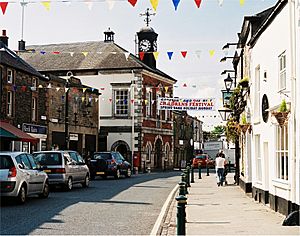 A view of Garstang Town Hall from the High Street 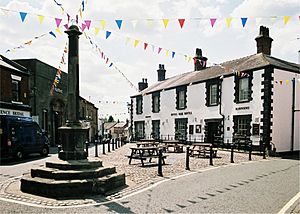 Garstang is an ancient market town and civil parish within the Wyre borough of Lancashire, England. It is 10 miles (16 km) north of the city of Preston and the same distance south of Lancaster.

In 2011, the parish had a total resident population of 4,268; the larger Garstang Built-up Area, which includes the adjoining settlements of Bonds and Cabus, had population of 6,779. Garstang is famous for being the world's first ever Fairtrade Town.

A brief but comprehensive history of the parish, including the parish church of St Helen in Churchtown and Greenhalgh Castle, can be found in "The Parish of Garstang", A History of the County of Lancaster: Volume 7.

St. John Plessington was born at Dimples Hall, which is just outside the town.

The town is overlooked by the ruined remains of Greenhalgh Castle, built in 1490 by Thomas Stanley, 1st Earl of Derby.

The town celebrates an arts festival and an agricultural show (which has been continued for 200 years) every year in August.

In April 2000 Garstang declared itself "the world's first Fairtrade Town", influencing many other towns, cities and counties around the United Kingdom to work towards the same goal. The Fairtrade Town status was renewed by the Fairtrade Foundation on 13 August 2003.

In 2011 a 518-foot (158 m) wind turbine, the UK's largest, was built in the town to provide power for Dewlay, a local factory producing the award-winning Garstang Blue cheese.

The local newspaper, the Garstang Courier, is available on tape free of charge to blind and partially sighted people from Galloway's Society for the Blind.

Local primary schools are Garstang Community Primary School, with about 245 pupils, St Thomas' Church of England School and SS Mary and Michael Catholic School. The local secondary school is Garstang Community Academy which does not offer sixth form courses; pupils travel to Lancaster, Preston or Blackpool and further for A level courses.

The town has seven public houses: The Farmers Arms, the Crown, the Eagle and Child, the King's Arms, the Royal Oak, the Wheatsheaf, Th'Owd Tithe Barn, with the Bellflower (formerly the Flag) in Nateby and Crofters Tavern in Cabus. It has three restaurants: Pipers, Ken Ma and the Great Season, the latter two being Chinese restaurants. There is also a golf club and Country Hotel and the Crofter's Hotel, on the main A6 road.

Garstang is referenced in episode 5 of the first series of the comedy Phoenix Nights. Brian Potter (played by Peter Kay) said "What have you called us? What have you called the best cabaret lounge this side of Garstang?" in reference to an alternative comedy night being run at his fictional club.

The town is served by the Anglican church of St Thomas and the Catholic church of St Mary and St Michael (just outside the town's boundaries in Bonds). Until 1881, Garstang's official parish church was St Helen's, 2 miles (3 km) away in Churchtown.

Lying on the River Wyre, River Calder and the Lancaster Canal, Garstang is situated close to the A6 road, the M6 motorway, and the West Coast Main Line, between Lancaster and Preston. It lies on the eastern edge of the Fylde, and the Forest of Bowland is not far to the east.

Garstang and the nearby villages of Bonds, Bowgreave, Catterall and Western Claughton-On-Brock form an almost continuous built-up area, bypassed by the A6 road in 1928 (incorrectly given as 1926 in). Other nearby villages not bypassed by the A6 road include: Brock, Bilsborrow, Cabus and Churchtown form another, much larger, continuous built-up area which includes Garstang in the centre.

The following people have lived at, or were born in Garstang:

Garstang F.C. are a non-league football club and the local team within the village. Founded in 1885, they play in the North West Counties League, having won the West Lanchashire League Premier League and Richardson Cup double in 2018.

All content from Kiddle encyclopedia articles (including the article images and facts) can be freely used under Attribution-ShareAlike license, unless stated otherwise. Cite this article:
Garstang Facts for Kids. Kiddle Encyclopedia.