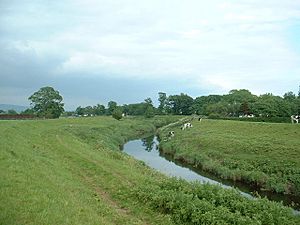 The River Wyre, near St Michael's on Wyre

The River Wyre is a river in Lancashire, England, United Kingdom, which flows into the Irish Sea at Fleetwood. It is approximately 28 miles (45 km) in length. The river is a County Biological Heritage Site and has a very broad and sheltered estuary covering many squares miles, forming the main water within the Fylde, an almost square pensinsular of Lancashire.

The name Wyre is of pre-Roman, likely if specific, Common Brittonic origin. It may be derived from *wiΣ-, a form of the element *wei, with a basic sense of "flowing", with the suffix –urā.

The River Wyre possibly shares its etymology with other river names, including the Wear in County Durham and the Quair Water in Scotland.

The Wyre near St Michael's On Wyre

The river rises in the Forest of Bowland in central Lancashire, as two distinct tributaries, the Tarnbrook Wyre and the Marshaw Wyre, whose confluence is near the village of Abbeystead. In 1984 a pumping station, built just below the confluence as part of a water transfer scheme in the 1980s, saw the Abbeystead disaster, an explosion in which 16 people were killed and a further 22 were injured.

From Abbeystead, the river flows south through Dolphinholme to Garstang, where the Lancaster Canal crosses on a small aqueduct. One mile south, at Catterall, it meets its first major tributary, the River Calder. The river then turns westwards, flowing through St Michael's On Wyre where it is joined by its second major tributary, the River Brock. It becomes tidal below the weir at St Michael's.

It is crossed by a toll bridge (normal fee is 50 pence) at Cartford, between Little Eccleston and Out Rawcliffe. A former toll bridge, Shard Bridge, close to Poulton-le-Fylde, has been rebuilt and is now free. A pedestrian ferry runs between Fleetwood and Knott End but the ferry to the Isle of Man no longer runs.

Major industry existed at the former ICI site at Burn Naze, close to the estuary of the river. It was originally an alkali works taking brine from mines and wells across the river in and around Preesall. Later processes undertaken on the site included those dealing with Vinyl Chloride Monomer, although this was later moved to Runcorn and ICI activity on the site ceased. Industrial activity by a number of various companies continues by the river, albeit on a much reduced scale.

The area around Burn Naze on the western side of the Wyre Estuary was formerly known as Bergerode, believed to be an Old English term for "shallow harbour", beor grade.

From Skippool, just downstream of Shard Bridge, to Fleetwood, the banks of the river form the Wyre Estuary Country Park. Facilities exist on the western bank. The park has its headquarters at Stanah. It has been the recipient of a Green Flag Award.

Fleetwood at the mouth of the river was a major fishing port up until the latter part of the 20th century. Wyre Dock was built there between 1869 and 1877. With the decline in the size of the fleet, most of the dock complex has subsequently been converted to a marina and the adjacent "Freeport" shopping village.

The Wyre is the only one of the major Lancashire rivers that flows wholly within Lancashire; the Ribble starts in Yorkshire, and the Lune starts in Cumbria.

All content from Kiddle encyclopedia articles (including the article images and facts) can be freely used under Attribution-ShareAlike license, unless stated otherwise. Cite this article:
River Wyre Facts for Kids. Kiddle Encyclopedia.