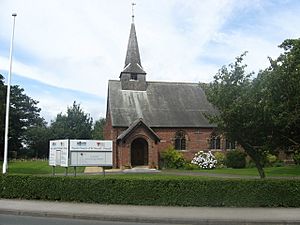 Preesall is a town, civil parish and electoral ward in Lancashire, England. The parish (until 1910 known as Preesall with Hackensall) covers the eastern bank of the estuary of the River Wyre, including Knott End-on-Sea, Pilling Lane and the village of Preesall itself. The parish of Preesall had a population of 5,314 recorded in the 2001 census, rising to 5,694 at the 2011 census.

There is evidence that the eastern side of the River Wyre was occupied during the Danish invasions of the 9th and 10th centuries. Preesall is mentioned in the Domesday Book (1086) as being a part of the Hundred of Amounderness and the Domesday place name is given as Pressouede.

The names Preesall and Hackensall are both probably Norse in origin, with Preesall meaning "a hill and a heath" and Hackensall probably deriving from "Haakon", a Viking seafarer who sailed up the River Wyre and set up an encampment in the 10th century. In 1190 the land was granted to a bowman in the service of Prince John, and in the 16th century, the land, like much in this area, passed into the possession of the Fleetwood family. Richard Fleetwood built Hackensall Hall in 1656 after their home at Rossall Hall was flooded. Nearby Parrox Hall was built about the same time, and has been in the possession of the Elletson family since 1690.

A known site of high archaeological importance is the former Hackensall Tide Mill (Site PRN15022, SD 35114659) at Preesall. This mill is known from documentary sources and may date from before 1260; its site is indicated on the OS 1:10,560 mapping of 1848 (sheet Lancashire 43). Other watermill sites of this period are known in the county, although this appears to be the only tide mill and very few simple medieval mill sites have been investigated in the field. Physical remains of medieval watermills are rare nationally and surviving remains are likely to be of national, rather than local, importance.

The beach surrounding Pilling, Preesall and Knott-End is known as Preesall Beach. Preesall is protected from high tides by a sea defence known as the "Sea Wall". There is a path on the sea wall that leads from Knott End-on-Sea to Pilling and at a point next to Preesall pumping station, the sea wall goes over an old, now filled in, stone pillbox from the Second World War which is camouflaged among the rocks.

West of the village itself lies a number of bodies of water, known locally as the Flashes. These are a remnant of the brine mining industry which flourished in the area.

Parrox Hall is a Grade II* listed country house, probably built in the early 17th century, which replaced and partly incorporated a previous building. It stands in its own grounds on the southern edge of the village of Preesall and is built of rendered brick in two storeys to an H-shaped floor plan.

The site of the hall has been continuously owned by members of the same family who have descended from the original Lord of the Manor of Preesall-with-Hackensall, Geoffrey the Crossbowman (Galfridus Arbalastarius). He was a Norman soldier who was granted six carucates of land by Prince John in 1189. The last family member to own the hall was Daniel Hope Elletson, who set up a trust to safeguard the hall's future. The Trust is currently undertaking a number of conservation and restoration projects. The hall hosts meetings, seminars and discussions and is also open to visiting groups by appointment and to the general public on a number of open days each summer.

Preesall has one pub remaining: the Black Bull.

Preesall used to lie on the long closed Garstang and Knot-End Railway which was built to provide an outlet for farmers in Over Wyre to transport their produce up and down the country. This section of the line opened on 30 July 1908, along with Preesall railway station. However, the line closed to passengers on 29 March 1930. There are bus services to and from both Lancaster and Blackpool.

All content from Kiddle encyclopedia articles (including the article images and facts) can be freely used under Attribution-ShareAlike license, unless stated otherwise. Cite this article:
Preesall Facts for Kids. Kiddle Encyclopedia.