Kids Encyclopedia Facts
Not to be confused with River Ribble, West Yorkshire.

The River Ribble runs through North Yorkshire and Lancashire in Northern England. It starts close to the Ribblehead Viaduct in North Yorkshire, and is one of the few that start in the Yorkshire Dales and flow westwards towards the sea (the Dee in Dentdale and the Twiss in Kingsdale being notable others).

The name Ribble may be a Brittonic compound-formation. The second element is the noun *pol, with connotations including "puddle, pond, upland-stream" (Welsh pwll). The first is rö-, an intensive prefix, with nouns meaning "great" (Welsh rhy-, Cornish re-).

Ribble may once have been known as *Bremetonā-, underlying the name Bremetenacum, the Roman fort at Ribchester. Involved here is the Brittonic root *breμ–, meaning "roaring" (c.f. Welsh brefu), as observed at the river-names Breamish in Northumberland, Braan in Scotland and Brefi in Wales.

Neolithic to Saxon finds from along the River Ribble during the creation of the Preston Docks and others revealed man has been in the area for a long time. The River Ribble looked completely different then and the coastline is likely to have been much further inland than it is at present where land has been reclaimed and the marsh extended out into the River Ribble due to sedimentation.

The Ribble would appear to have been known in Roman times as the Belisama, possibly giving its name to Samlesbury. Ptolemy's "Belisama aest." seems to represent the estuary of the Ribble. Bremetennacum was a Roman fort that guarded a crossing-point of the river at Ribchester. Remains of another Roman site were discovered at Walton-le-Dale in the mid-19th century.

The medieval silver Mitton Hoard was found near where this river joins the River Hodder in 2009. Whilst the Cuerdale Hoard, the largest Viking silver hoard ever found outside Russia was discovered in 1840 on the southern bank of a bend of the river, at Cuerdale near Preston.

At one time the Ribble marked the northernmost extent of the ancient kingdom of Mercia. At the time of the Domesday Book, the river formed the northern boundary of an area of land (known as Inter Ripam et Mersam) that was included in the Domesday information for Cheshire, though it was probably not formally part of the county of Cheshire. 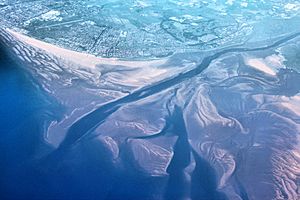 The Ribble begins at the confluence of the Gayle Beck and Batty Wife Beck near the viaduct at Ribblehead, in the shadow of the Yorkshire three peaks. It is the only major river rising in Yorkshire which flows westward. It flows through Settle, Clitheroe, Ribchester and Preston, before emptying into the Irish Sea between Lytham St. Annes and Southport, a length of 75 miles (121 km). Its main tributaries are the Hodder and Calder which join the river near Great Mitton, the River Darwen which joins at Walton-le-Dale and the River Douglas which joins near Hesketh Bank.

Above Hellifield the valley of the river is known as Ribblesdale.

The Ribble Way is a long-distance footpath which follows the river for much of its course. The river is connected to both the Leeds and Liverpool Canal and the Lancaster Canal (via the Ribble Link). The river downstream of Preston was actively dredged when Preston was an active port; this is no longer done and silt from the river is now spreading more widely over the (sand) beaches around Fairhaven and St. Annes.

Its 10-mile-wide (16 km) estuary forms part of the Ribble and Alt Estuaries Special Protection Area for wildlife. An average of 340,000 water birds over-winter in the estuary making it the most important wetland site in Britain. The Ribble is also a key breeding ground for the endangered Atlantic salmon.

The Normal Tidal Limit (NTL) of the river is at Fishwick Bottoms, between Preston and Walton-le-Dale, 11 miles (18 km) from the sea.

The River Ribble has the third-largest tides in England, with tides that run at 4 knots (5 mph; 7 km/h) and a tidal range at the mouth of the river of 26 feet (8 m) during spring tides. Since River Ribble dredging ceased, the estuary is filling up with sand and is developing a meandering path, depending on the tides and river runoff. In addition, many tributaries flow into the main channel including the Savick Brook/Ribble Link, while the River Douglas, has a significant influence both on sediment transport and hydrodynamics of the estuary.

The River Ribble catchment is covered by the Ribble Rivers Trust, a UK based charity working to improve, protect and promote the River Ribble for both people and wildlife.

Preston City Council have published plans to build a barrage across the River Ribble, in their 'Riverworks' proposals. The aim of these proposals is to build a water sports park on a section of the Ribble, coupled with over 4,000 units of housing and businesses in the river's flood plain. Some local residents are opposing these plans, arguing that they endanger wildlife, increase flood risk to local housing and damage greenbelt areas. These residents have set up the Save The Ribble campaign. Parts of the river are a County Biological Heritage Site.

A Ribble estuary fixed crossing has been proposed on several occasions, to provide a quicker route between the seaside resorts of Southport and Blackpool. Two routes for a tramroad were proposed; the first in 1899 outlined a route between Crossens and Lytham, then between 1900-06 as a route from Crossens to Warton via Hesketh Bank. A railway tunnel was proposed in 1907, between Hesketh Bank and Warton. A bridge was proposed between 1938 and 1947. A road link was campaigned for in 2007, envisaging a development similar to the Rance Tidal Power Station in Brittany. In 2011, an April fools' joke suggested a 9-mile-long (14 km) road tunnel from Marshside to Lytham St Annes.

For more details, see List of tributaries of the River Ribble 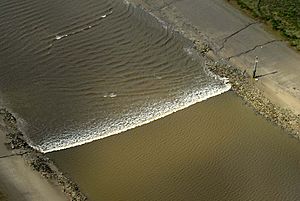 Tidal bore on the Ribble, between the River Douglas and Preston

All content from Kiddle encyclopedia articles (including the article images and facts) can be freely used under Attribution-ShareAlike license, unless stated otherwise. Cite this article:
River Ribble Facts for Kids. Kiddle Encyclopedia.