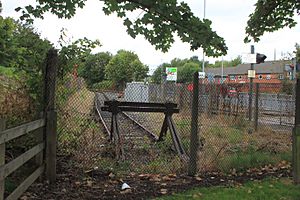 The Ribble Steam Railway is a standard gauge preserved railway in Lancashire, in the United Kingdom. It was opened to the public on 17 September 2005, running along Preston Docks. The railway began by housing much of the collection from the previously closed Southport Railway Museum (Steamport), which was based in the old Lancashire and Yorkshire Railway engine shed at Southport (BR shed code 27C).

The railway lines around Preston Dock largely fell into disuse after the closure of the docks. A preservation group that was operating in Southport relocated to Preston in 1999 and started operations as the Ribble Steam Railway in 2005. Its operations base is at Preston Riverside but they run trains as far as Strand Road although there is no facility for locomotives to run round their train here.

The Riverside station is quite a way from Preston city centre, but proposals have been made for a platform to be constructed at Strand Road. This would be close to the Portway terminus of the Preston park and ride service, Guild Wheel walking trail and the River Ribble.

The project was first started in 1973, a preservation centre opened in Southport, on the former Lancashire and Yorkshire Railway steam shed at Derby Road, However, the shed was becoming a costly burden to handle for the museum, so a relocation scheme was started. Preston Docks was chosen as the new location for the museum. Preston Docks has a large railway network, that used to serve the vast docks and quays. But when the docks closed, the railway was not used. The project finally closed the Southport Railway Museum in 1999.

The project's new site now could be re-developed with new large workshops, platforms and a museum. The first building to open was the workshop, in 2001. Locomotives could now go into the building, and more space could now be utilised. Next to the workshop, is the machine shop, built in 1978. At the other end of the workshop is the visitor centre, which contains the museum, cafe, shop and railway platform. The museum was finally completed in 2004. The collection of locomotives (61, one on loan from the National Railway Museum, one from the Lancashire and Yorkshire Railway Trust. 55 are currently on site.), is one of the largest collection of locomotives in the United Kingdom.

The museum also operates passenger services to Strand Road Crossing and back, from its own station – Preston Riverside. The frequency of its trains is hourly, and are usually made up of two or more Mark 1 coaches and a small steam engine or diesel engine. This service is only operational in the summer months.

A separate company, Ribble Rail, handles the freight traffic that uses the dock lines. Ribble Rail takes over from the Colas Rail locomotive, and carries the load – Bitumen – down to the Total plant near the Preston Riverside station.

A Colas Rail-operated train arrives at the riverside sidings near Strand Road Crossing with loaded oil tanks. The locomotive uncouples, runs round and takes the empty wagons. This process occurs very early in the morning on Mondays, Wednesdays and Fridays.

The museum is currently located in an industrial estate, and is not well publicised. There were plans to build a station at the Strand Road Crossing, so that the railway could serve the busier side of the docks, in order that the line might be marketed as a passenger service in addition to pleasure rides.

One of the more recent projects that is now planned to be underway in 2017 is the installation of a turntable at Riverside station, this will allow the operational running fleet to be turned in a bid to even out flangewear, it will also be ideal for when visiting locomotives visit the line.

A L&YR signal box was bought for the railway. It will be restored to its original condition, and put near the Preston Riverside station. Main foundation works are now complete, now awaiting a block construction wall to sit the box on to.

There have also been plans to extend the railway to the Ribble Link canal. The route would offer 1.5 miles extra to the line, although plans for this have not been finalised as major funding streams need to be found, in order to raise the huge amount of funds required for such a significant project. 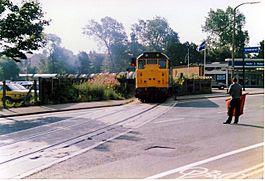 A train crossing Strand Road towards the docks in 1989 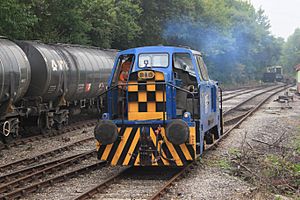 The only regular freight traffic in 2015 is bitumen which is brought in 15 tank wagons from Lindsey Oil Refinery for Total three times each week. After crossing the road it is taken a short distance further to a group of three railway tracks. The main line locomotive switches to a train of empty wagons while a small diesel locomotive takes the full train on to the Lanfina Siding which is adjacent to Lockside Road near Preston Riverside station.

The railway has a large collection of industrial steam engines and one main line locomotive.

The railway has a large collection of diesel locomotives either for shunting or use on passenger trains.

Locos on display in the museum

Locomotives that are not currently planned to be overhauled or if there is not a space available in the workshop are displayed inside the museum until they're called into the workshop.

All content from Kiddle encyclopedia articles (including the article images and facts) can be freely used under Attribution-ShareAlike license, unless stated otherwise. Cite this article:
Ribble Steam Railway Facts for Kids. Kiddle Encyclopedia.