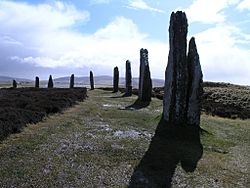 The Ring of Brodgar 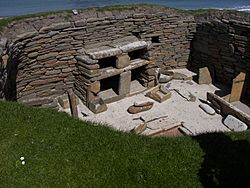 The inside of the Neolithic houses constructed on Skara Brae in the Orkneys, northeast of Scotland. 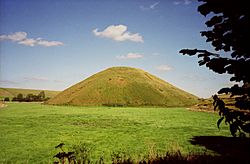 The Neolithic site of Silbury Hill in Wiltshire, southern England, is one example of the large ceremonial monuments constructed across the British Isles in this period.

The Neolithic British Isles is about the remains of tribes living in the islands from about 4000 BC to 2,500 BC. These people left stone monuments and other remains in Great Britain, Ireland, the Isle of Man and many other islands.p37 The Neolithic was the last part of the Stone Age in the British Isles.

Before the Neolithic period was the Mesolithic period, and after the Neolithic was the Bronze Age. During the Mesolithic, the inhabitants of the British Isles were nomadic hunter-gatherers. Around 4000 BC new ideas arrived in the islands from continental Europe. These ideas were taken up by the natives, and led to huge changes in both the society and the landscape. This has been called the Neolithic Revolution.

The Neolithic is marked by agriculture and living in settlements, with the hunter-gatherer lifestyle declining. To make room for the new farmland, these early agricultural communities cut down trees (deforestation) across the islands. This very greatly changed the landscape. At the same time, many new types of stone tools began to be produced. They needed new skills, such as polishing.

The Neolithic tribes built many monuments in the landscape, many of which were megalithic in nature. The earliest of these are the chambered tombs, although later came the building of stone circles, a trend that would continue into the following Bronze Age. These constructions were probably places for ceremonies and religious rites. New ideas about religion, ritual and social hierarchy came with the new lifestyle.

Neolithic people on these islands were not literate, so left no written record. Everything we know about this time comes from archaeological investigations. This investigation began with the antiquarians of the 18th century, and intensified in the 19th when John Lubbock coined the term "Neolithic". The work expanded during the 20th and 21st centuries.

"The Neolithic period is one of remarkable changes in landscapes, societies and technologies, which changed a wild, forested world, to one of orderly agricultural production and settled communities on the brink of socially complex 'civilisation'. It was a period that saw the arrival of new ideas and domesticated plants and animals, perhaps new communities, and the transformation of the native peoples of Britain. The Neolithic opened an entirely new episode in human history. It took place in Britain over a relatively short space of time, lasting in total only about 2000 years - in human terms little more than 80-100 generations."

During the Mesolithic, Britain was still attached by the landmass of Doggerland to the rest of continental Europe. Archaeologist and prehistorian Caroline Malone noted that during the Late Mesolithic, the British Isles were something of a "technological backwater" in European terms, still living as a hunter-gatherer society whilst most of southern Europe had already taken up agriculture and sedentary living.p11

The spread of the Neolithic

The first societies in the world to abandon hunter-gathering and replace it with agriculture were found in the Near East around 8000–6000 BC. Similar developments occurred independently in China, and later in Mesoamerica, southeast Asia, Africa and India.p18 It was in the Near East that the "most important developments in early farming" occurred in the Levant and the mountains surrounding what is now Syria, Israel, Jordan, Turkey, Iran and Iraq. These areas already had rich ecological variation that was being exploited by hunter-gatherers in the Upper Palaeolithic and Mesolithic periods.p20

Early signs of these hunter-gatherers beginning to harvest, select and grow various food plants have been found in the Mesolithic Natufian culture of the Levant. These are signs that would later lead to the actual domestication and farming of crops. Archaeologists believe that the Levantine peoples developed agriculture between 8000 and 7000 BC in response to a rise in their population levels which could not be fed by the food which hunting and gathering could provide.p20 The idea of agriculture spread from the Levant into Europe, being adopted by hunter-gathering societies in what is now Turkey, Greece, the Balkans, and across the Mediterranean, eventually reaching north-western Europe and the British Isles.p22

The Neolithic in the British Isles

The archaeological community still debate whether the Neolithic Revolution was brought to the British Isles through by adoption by natives or by migrating groups of continental Europeans who decided to settle there.p22

"After over a thousand years of early farming, a way of life based on ancestral tombs, forest clearance and settlement expansion came to an end. This was a time of important social changes".p57

The period that followed the Neolithic is known by archaeologists as the Bronze Age, because bronze was used for making certain tools.

All content from Kiddle encyclopedia articles (including the article images and facts) can be freely used under Attribution-ShareAlike license, unless stated otherwise. Cite this article:
Neolithic British Isles Facts for Kids. Kiddle Encyclopedia.