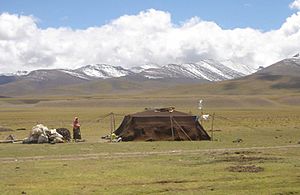 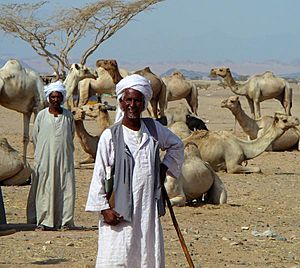 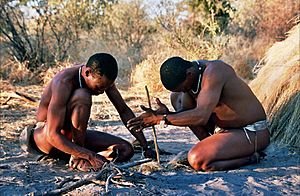 Nomadic people (or nomads) are people who move from one place to another, instead of living in one place. The best known examples in Europe are gypsies, Roma, Sinti, and Irish travelers. Many other ethnic groups and communities are traditionally nomadic; such as Berbers, Kazakhs, and Bedouin.

People are nomads for many reasons. Most nomads are family men herding their livestock, such as cattle, or horses from pasture to pasture. These people have to change places because of the weather. Other nomads are traders and craftsmen (people who make things), traveling to exchange goods or to practice their craft where it is needed.

Nomads who follow their herds usually live in tents with few things inside, like the Mongols. Nomads who trade or practice crafts usually have wagons in which they travel, because wagons are better for carrying goods.

The Sami of Lapland are semi-nomadic tribe following a herd of reindeer. They are a migratory people who lead their own herd of reindeer to winter feeding grounds and then return them in the spring to their feeding ground close to a permanent home base, where their family lives. This cycle happens every year.

The skills of nomadic life can also be useful in mobile warfare, and have been used in attacking sedentary agricultural and urban people. Genghis Khan and the Mongol hordes, for example conquered vast areas in Asia by organizing themselves as cavalry.

All content from Kiddle encyclopedia articles (including the article images and facts) can be freely used under Attribution-ShareAlike license, unless stated otherwise. Cite this article:
Nomadic people Facts for Kids. Kiddle Encyclopedia.