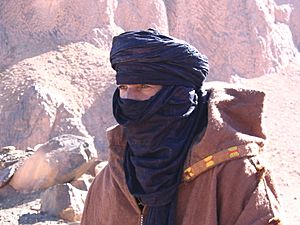 The Tuareg (Arabic: طوارق, sometimes spelled Touareg in French, or Twareg in English) are a Berber ethnic group. The Tuareg today lives mostly in West Africa, but they were once nomads that moved throughout the Sahara. They used their own writing known as the tifinaɤ.

Today most Tuaregs are Muslims. However, unlike in many other Muslim peoples, they value women a lot. Their most important leader was a woman. Tuareg men use veils, but not women. Their families are matrilinear.

All content from Kiddle encyclopedia articles (including the article images and facts) can be freely used under Attribution-ShareAlike license, unless stated otherwise. Cite this article:
Tuareg people Facts for Kids. Kiddle Encyclopedia.