Kingdom of Hungary facts for kids

The Kingdom of Hungary was a monarchy in Central Europe that existed from the Middle Ages into the 20th century (1000–1946 with the exception of 1918–1920). The Principality of Hungary emerged as a Christian kingdom upon the coronation of the first king Stephen I at Esztergom around the year 1000; his family (the Árpád dynasty) led the monarchy for 300 years. By the 12th century, the kingdom became a European middle power within the Western world.

Due to the Ottoman occupation of the central and southern territories of Hungary in the 16th century, the country was partitioned into three parts: the Habsburg Royal Hungary, Ottoman Hungary, and the semi-independent Principality of Transylvania. The House of Habsburg held the Hungarian throne after the Battle of Mohács until 1918 and also played a key role in the liberation wars against the Ottoman Empire.

From 1867, territories connected to the Hungarian crown were incorporated into Austria-Hungary under the name of Lands of the Crown of Saint Stephen. The monarchy ended with the deposition of the last king Charles IV in 1918, after which Hungary became a republic. The kingdom was nominally restored during the "Regency" of 1920–46, ending under the Soviet occupation in 1946.

The Kingdom of Hungary was a multiethnic state from its inception until the Treaty of Trianon and it covered what is today Hungary, Poland, Slovakia, Transylvania and other parts of what is now Romania, Carpathian Ruthenia (now part of Ukraine), Vojvodina (now part of Serbia), Burgenland (now part of Austria), and other smaller territories surrounding present-day Hungary's borders. From 1102 it also included Croatia, being in personal union with it, united under the King of Hungary.

Today, the feast day of the first king Stephen I (20 August) is a national holiday in Hungary, commemorating the foundation of the state (Foundation Day).

Transitioning into a republic 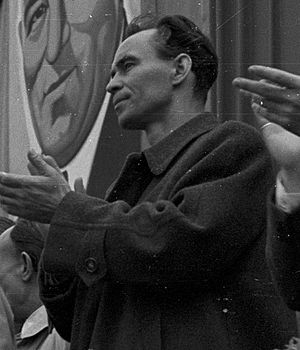 László Rajk was a Hungarian Communist politician, who served as Minister of Interior and Minister of Foreign Affairs

Following its occupation of Hungary in 1944, the Soviet Union imposed harsh conditions allowing it to seize important material assets and control internal affairs. After the Red Army set up police organs to persecute class enemies, the Soviets assumed that the impoverished Hungarian populace would support the communists in the coming elections. The communists fared poorly resulting in a coalition government under Prime Minister Zoltán Tildy. 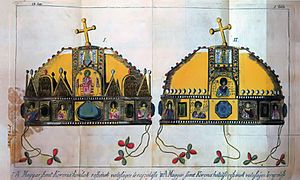 Engraving of the Hungarian Holy Crown

In 1946 the form of government was changed to a republic. Soon after the monarchy was abolished, the Soviet Union pressed Hungarian leader Mátyás Rákosi to take a "line of more pronounced class struggle." What emerged was a communist state lasting until October 23 1956 when the Soviet Russian occupation was swept away by the Hungarian uprising, victorious until November 10 1956. Soviet occupation was restored lasting until 1989 when the Communists agreed to give up their monopoly on power, paving the way for free elections in March 1990.

In today's free republic, the Kingdom is regarded as one long stage in the development of the state. This sense of continuity is reflected in the republic's national symbols such as the Holy Crown of Hungary and the Coat of arms of Hungary, which are the same as when the monarchy was still in place. Several holidays, the official language (Hungarian), and the capital city Budapest have also been retained. The millennium of the Hungarian statehood was commemorated in 2000 and codified by the Millennium Act of 2000.

All content from Kiddle encyclopedia articles (including the article images and facts) can be freely used under Attribution-ShareAlike license, unless stated otherwise. Cite this article:
Kingdom of Hungary Facts for Kids. Kiddle Encyclopedia.