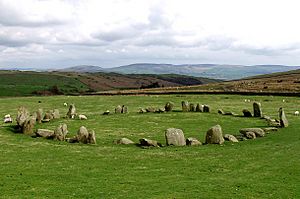 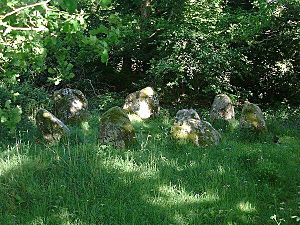 Lisseviggen Stone circle, in county Kerry, in Ireland. Locally, this is known as the Seven Sisters. It is outside Killarney

A stone circle is an ancient monument. It is made of several standing stones, usually menhirs that are arranged in a certain way. Very often those stones form circles or ellipses. The number of stones can vary between four and 60. Very often, burial sites are in the circle, or nearby. There are about 1,000 stone circles and 80 stone henges in the Great Britain and Ireland. Most likely stone circles were used for rituals. They might also have been used as calendars; some stone circles are arranged so that certain stones are lit on special dates, such as the summer solstice.

All content from Kiddle encyclopedia articles (including the article images and facts) can be freely used under Attribution-ShareAlike license, unless stated otherwise. Cite this article:
Stone circle Facts for Kids. Kiddle Encyclopedia.