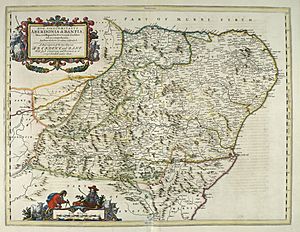 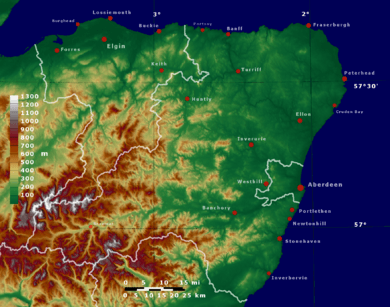 Topographic map of Aberdeenshire and Moray

Aberdeenshire (Scots: Aiberdeenshire; Scottish Gaelic: Siorrachd Obar Dheathain) is one of the 32 council areas of Scotland.

It takes its name from the County of Aberdeen which has substantially different boundaries. The Aberdeenshire Council area includes all of the area of the historic counties of Aberdeenshire and Kincardineshire (except the area making up the City of Aberdeen), as well as part of Banffshire. The county boundaries are officially used for a few purposes, namely land registration and lieutenancy.

Aberdeenshire Council is headquartered at Woodhill House, in Aberdeen, making it the only Scottish council whose headquarters are located outside its jurisdiction. Aberdeen itself forms a different council area (Aberdeen City). Aberdeenshire borders onto Angus and Perth and Kinross to the south, Highland and Moray to the west and Aberdeen City to the east.

Traditionally, it has been economically dependent upon the primary sector (agriculture, fishing, and forestry) and related processing industries. Over the last 40 years, the development of the oil and gas industry and associated service sector has broadened Aberdeenshire's economic base, and contributed to a rapid population growth of some 50% since 1975. Its land represents 8% of Scotland's overall territory. It covers an area of 6,313 square kilometres (2,437 sq mi).

Aberdeenshire has a rich prehistoric and historic heritage. It is the locus of a large number of Neolithic and Bronze Age archaeological sites, including Longman Hill, Kempstone Hill, Catto Long Barrow and Cairn Lee. The area was settled in the Bronze Age by the Beaker culture, who arrived from the south around 2000-1800 BC. Stone circles and cairns were constructed predominantly in this era. In the Iron Age, hill forts were built. Around the 1st century AD, the Taexali people, who have left little history, were believed to have resided along the coast. The Picts were the next documented inhabitants of the area, and were no later than 800-900 AD. The Romans also were in the area during this period, as they left signs at Kintore. Christianity influenced the inhabitants early on, and there were Celtic monasteries at Old Deer and Monymusk.

Since medieval times there have been a number of traditional paths that crossed the Mounth (a spur of mountainous land that extends from the higher inland range to the North Sea slightly north of Stonehaven) through present-day Aberdeenshire from the Scottish Lowlands to the Highlands. Some of the most well known and historically important trackways are the Causey Mounth and Elsick Mounth.

These new families set the stage for the upcoming rivalries during the 14th and 15th centuries. This rivalry grew worse during and after the Protestant Reformation, when religion was another reason for conflict between the clans. The Gordon family adhered to Catholicism and the Forbes to Protestantism. Three universities were founded in the area prior to the 17th century, King's College in Old Aberdeen (1494), Marischal College in Aberdeen (1593), and the University of Fraserburgh (1597).

After the end of the Revolution of 1688, an extended peaceful period was interrupted only by such fleeting events such as the Rising of 1715 and the Rising of 1745. The latter resulted in the end of the ascendancy of Episcopalianism and the feudal power of landowners. An era began of increased agricultural and industrial progress. During the 17th century, Aberdeenshire was the location of more fighting, centered on the Marquess of Montrose and the English Civil Wars. This period also saw increased wealth due to the increase in trade with Germany, Poland, and the Low Countries.

The present council area is named after the historic county of Aberdeen, which had different boundaries and was abolished in 1975 under the Local Government (Scotland) Act 1973. It was replaced by Grampian Regional Council and five district councils: Banff and Buchan, Gordon, Kincardine and Deeside, Moray and the City of Aberdeen. The current Aberdeenshire consists of all of former Aberdeenshire, former Kincardineshire and the northeast portions of Banffshire. Local government functions were shared between the two levels. In 1996, under the Local Government etc (Scotland) Act 1994, the Banff and Buchan district, Gordon district and Kincardine and Deeside district were merged to form the present Aberdeenshire council area, with the other two districts becoming autonomous council areas.

The population of the council area has risen over 50% since 1971 to approximately 262,200, representing 4.7% of Scotland's total. Aberdeenshire's population has increased by 9.1% since 2001, while Scotland's total population grew by 3.8%. The census lists a relatively high proportion of under 16s and slightly fewer people of working age compared with the Scottish average.

Aberdeenshire is one of the most homogeneous/indigenous regions of the UK. In 2011 82.2% of residents identified as 'White Scottish', followed by 12.3% who are 'White British', whilst ethnic minorities constitute only 0.9% of the population. The largest ethnic minority group are Asian Scottish/British at 0.8%. In addition to the English language, 48.8% of residents reported being able to speak and understand the Scots language.

The fourteen biggest settlements in Aberdeenshire (with 2011 population estimates) are: 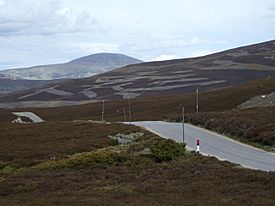 The B976 road near Gairnshiel 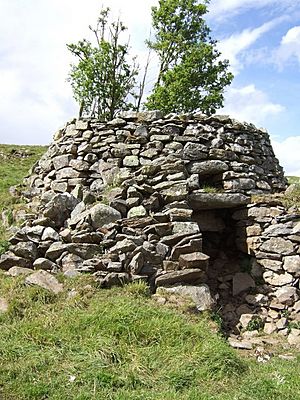 An old lime kiln at Badenyon

The following significant structures or places are within Aberdeenshire:

There are numerous rivers and burns in Aberdeenshire, including Cowie Water, Carron Water, Burn of Muchalls, River Dee, River Don, River Ury, River Ythan, Water of Feugh, Burn of Myrehouse, Laeca Burn and Luther Water. Numerous bays and estuaries are found along the seacoast of Aberdeenshire, including Banff Bay, Ythan Estuary, Stonehaven Bay and Thornyhive Bay. Aberdeenshire is in the rain shadow of the Grampians, therefore it is a generally dry climate, with portions of the coast, receiving 25 inches (64 cm) of moisture annually. Summers are mild and winters are typically cold in Aberdeenshire; Coastal temperatures are moderated by the North Sea such that coastal areas are typically cooler in the summer and warmer in winter than inland locations. Coastal areas are also subject to haar, or coastal fog.

Aberdeenshire's Gross Domestic Product (GDP) is estimated at £3,496M (2011), representing 5.2% of the Scottish total. Aberdeenshire's economy is closely linked to Aberdeen City's (GDP £7,906M) and in 2011 the region as a whole was calculated to contribute 16.8% of Scotland's GDP. Between 2012 and 2014, the combined Aberdeenshire and Aberdeen City economic forecast GDP growth rate is 8.6%, the highest growth rate of any local council area in the UK and above the Scottish rate of 4.8%.

A significant proportion of Aberdeenshire's working residents commute to Aberdeen City for work, varying from 11.5% from Fraserburgh to 65% from Westhill.

Average Gross Weekly Earnings (for full-time employees employed in work places in Aberdeenshire in 2011) are £572.60. This is lower than the Scottish average by £2.10 and a fall of 2.6% on the 2010 figure. The average gross weekly pay of people resident in Aberdeenshire is much higher, at £741.90, as many people commute out of Aberdeenshire, principally into Aberdeen City.

Total employment (excluding farm data) in Aberdeenshire is estimated at 93,700 employees (Business Register and Employment Survey 2009). The majority of employees work within the service sector, predominantly in public administration, education and health. Almost 19% of employment is within the public sector. Aberdeenshire's economy remains closely linked to Aberdeen City's and the North Sea oil industry, with many employees in oil-related jobs.

All content from Kiddle encyclopedia articles (including the article images and facts) can be freely used under Attribution-ShareAlike license, unless stated otherwise. Cite this article:
Aberdeenshire Facts for Kids. Kiddle Encyclopedia.