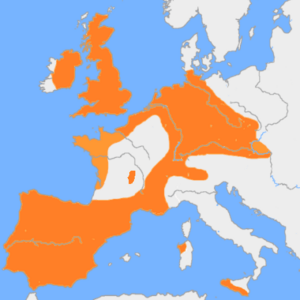 The brown areas show where the beaker culture was

The Bell-Beaker culture (or Beaker culture, Beaker people or Beaker folk) is the name of a cultural phenomenon which occurred in large parts of Western Europe, roughly between 2800 BC and 2200 BC (in Great Britain until about 1900 BC). Today, it is unclear whether this can be seen as a culture.

Paul Reinecke was the first to use the word Glockenbecher (bell-shaped cup) in German, around 1900. Other historians from Italy and Czechoslovakia had used similar terms before.

Gordon Childe thought that the people were missionaries, who also had the knowledge how to make copper. They spread from the Iberian peninsula on the edges of Europe with the oceans. The typical items linked to the movement were prestige items reserved to the upper class, according to Steven Shennan. Christian Strahm talk about a Glockenbecherphänomen (bell-shaped cup phenomenon), to avoid the word culture. 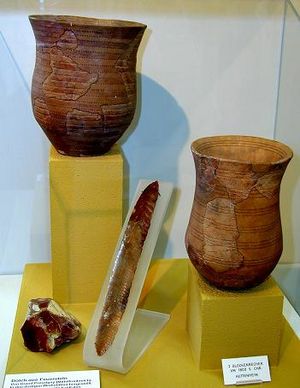 typical objects found in graves of the Beaker culture

People of the movement were buried in a special way: Often stone chests were used. In the western part of the culture, burials in megalithic tombs and caves are common - the burial rites are often adapted to local customs. People where buried in an embryonic position:

This means that both looked east, when buried.

Today, little is known about the settlements used by the culture. The only places where settlements/remains of settlements that were done at approximately the same time were found is in Knowth in Ireland, and one in Switzerland.

Another culture that might have influenced the Beaker culture is the Corded Ware culture, mainly found in Northern Europe.

All content from Kiddle encyclopedia articles (including the article images and facts) can be freely used under Attribution-ShareAlike license, unless stated otherwise. Cite this article:
Beaker culture Facts for Kids. Kiddle Encyclopedia.