Kids Encyclopedia Facts
This page is about the mountains in Scotland. For the hills in New Zealand, see The Grampians (New Zealand).
"Grampians" redirects here. For other uses, see Grampians (disambiguation). 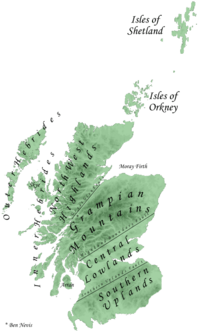 Location of the Grampian Mountains within Scotland 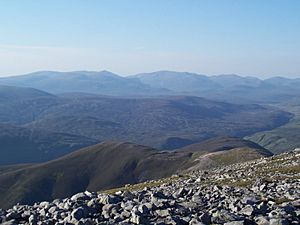 The Cairngorms from Beinn a' Ghlò.

The Grampian Mountains or Grampians (Am Monadh in Gaelic) are one of the three major mountain ranges in Scotland, occupying a considerable portion of the Scottish Highlands in northeast Scotland. The range extends southwest to northeast between the Highland Boundary Fault and the Great Glen, occupying almost half of the land area of Scotland and including the Cairngorms and the Lochaber hills. The range includes many of the highest mountains in the British Isles, including Ben Nevis and Ben Macdui the two highest.

There is some ambiguity about the extent of the range. In the introduction of Wyness (1969) the author, writing about Deeside, puts the northern edge of the Grampians at the River Dee when he writes:

... until comparatively recent times, Deeside was an isolated and little frequented region and the reason for this is the extensive mountain barrier of the Grampians which begins in a low range on the seacoast immediately south of Aberdeen and rise through various intervening heights such as Cairn-mon-earn (1,245 ft), Kerloch (1,747 ft), Mount Battoch (2,555 ft), Mount Keen (3,007 ft), Lochnagar (3,786 ft), Beinn a' Ghlo (3,671 ft), to Beinn Dearg (3,304,089 ft)

Clearly, then, Wyness defines the Cairngorm as being the range of mountains running from immediately south of Aberdeen’ westward to Beinn Dearg in the Forest of Atholl.

In Watson (1975) the author – while defining the extent of the Cairngorms – specifically excludes the range south of the River Dee, writing:

The other main hill group is the long chain running from Drumochter in the W almost to the sea just S of Aberdeen. Many maps and books have given its name as ‘the Grampians’ but although children have to learn this at school, they do not learn it at home and nowhere is it used in local speech. Some map-makers have confused the issue by printing ‘Grampians’ over the Cairngorms and Strath Don hills as well!

Both Wyness and Watson roughly agree where the eastern, northern, and western limits of The Cairngorms lie.

The Grampians extend southwest to northeast between the Highland Boundary Fault and the Great Glen. This includes the Cairngorms and the Lochaber hills. The range includes Ben Nevis (the highest point in the British Isles at 1,344 metres above sea level) and Ben Macdui (the second highest at 1,309 metres).

The mountains are composed of granite, gneiss, marble, schists and quartzite. The other major mountain ranges in Scotland are the Northwest Highlands and the Southern Uplands.

A number of rivers and streams rise in the Grampians: the Tay, Spey, Cowie Water, Burn of Muchalls, Burn of Pheppie, Burn of Elsick, Cairnie Burn, Don, Dee and Esk. The area is generally sparsely populated.

View of the Grampian Mountains, 1831

The Roman historian Cornelius Tacitus recorded Mons Graupius as the site of the defeat of the native Caledonians by Gnaeus Julius Agricola circa 83 AD. The actual location of Mons Graupius, literally 'the Graupian Mountain' (the element 'Graupian' is of unknown significance), is a matter of dispute among historians, though most favour a location within the Grampian massif, possibly at Raedykes, Megray Hill or Kempstone Hill. The spelling Graupius comes from the Codex Aesinas, a mediaeval copy of Tacitus's Germania believed to be from the mid-9th century. "Graupius" was incorrectly rendered "Grampius" only in the 1476 printed edition of Tacitus's biography of Agricola. The name Grampians is believed to have first been applied to the mountain range in 1520 by the Scottish historian Hector Boece, an adaptation of the incorrect Mons Grampius. Thus the range owes its name to this day to a typesetter's mistake.

In the Middle Ages, this locale was known as the Mounths, a name still held by a number of geographical features. Until the 19th century, they were generally considered to be more than one range. This view is still held by many today, and they have no single name in the Scottish Gaelic language or Doric dialect of the Lowland Scots. In both languages, a number of names are used. Grampian Region was translated into Scots Gaelic as "Roinn a' Mhonaidh".

All content from Kiddle encyclopedia articles (including the article images and facts) can be freely used under Attribution-ShareAlike license, unless stated otherwise. Cite this article:
Grampian Mountains Facts for Kids. Kiddle Encyclopedia.