Isle of Arran facts for kids 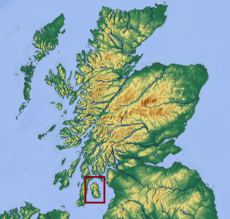 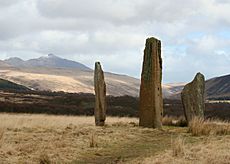 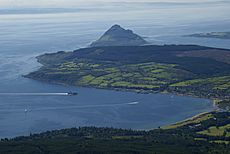 Arran or the Isle of Arran is the largest island in the Firth of Clyde, Scotland.

With an area of 432 square kilometres (167 sq mi) it is the seventh largest Scottish island. Just over 5,000 people live there.

Arran shares with the Hebrides cultural and physical similarities. Arran is mountainous and has been described as a "geologist's paradise".p11/17

People have lived there since the early Neolithic period, from which time on there are numerous prehistoric remains.

From the 6th century on peoples from Ireland colonised the island and it became a centre of religious activity. During the troubled Viking Age, Arran became the property of the Norwegian crown before becoming formally absorbed by the Kingdom of Scotland in the thirteenth century.

The 19th century "clearances" led to significant reductions in population and the end of the Gaelic language and way of life.

The economy and population have recovered in recent years, the main industry being tourism. There is diversity of wildlife, including three species of tree endemic to the area. There are regular field trips in the summer by geology and biology students.

The island is sometimes referred to as "Scotland in miniature", as it is divided into "Highland" and "Lowland" areas by the Highland Boundary Fault which runs northeast to southwest across Scotland.p297/301

The island is a popular destination for geologists, who come to see intrusive igneous landforms such as sills and dykes as well as sedimentary and metasedimentary rocks ranging in age from Precambrian to Mesozoic.

Most of the interior of the northern half of the island is taken up by a large granite batholith that was created by substantial volcanic activity around 60 million years ago in the Tertiary period. There is an older outer ring of coarse granites and an inner core of finer grained material.

Sedimentary rocks dominate the southern half of the island, especially Old and New Red Sandstone. Sand dunes are preserved in Permian sandstones near Brodick, there are localised outcrops of Triassic rocks,p143/4/9 and even some Cretaceous chalk.

Visiting in 1787, the geologist James Hutton found his first example of an unconformity to the north of Newton Point near Lochranza, which provided evidence for his Plutonist theories of uniformitarianism, and about the age of the Earth. This spot is one of the most famous places in the study of geology.

The Pleistocene glaciations almost entirely covered Scotland in ice. After the last retreat of the ice at the close of the Pleistocene epoch sea levels were up to 70 metres (230 ft) lower than at present and it is likely that circa 14,000 years ago the island was connected to mainland Scotland.p68/69

Sea level changes and the isostatic rise of land makes charting coastlines a complex task, but the island is clearly ringed by post glacial raised beaches.p28

What this means is that the huge weight of ice pressed down the Earth's crust here, and so the beaches were much higher up than now. Gradually, long after the ice melted, the island came back up.

There are tall sea cliffs to the north east including large rock slides under the heights of Torr Reamhar and at Scriden (An Scriodan) at the far north end of the island. The Scriden rocks fell "some two hundred years ago, with a concussion that shook the earth and was heard in Bute and Argyllshire".p19

All content from Kiddle encyclopedia articles (including the article images and facts) can be freely used under Attribution-ShareAlike license, unless stated otherwise. Cite this article:
Isle of Arran Facts for Kids. Kiddle Encyclopedia.