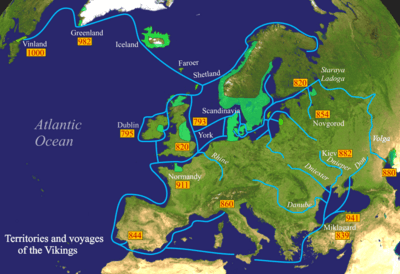 The long reach of Viking Expeditions through most of Europe, the Mediterranean Sea, Northern Africa, Asia Minor, the Arctic and to North America

The Viking Age was a period of time in Northern European and Scandinavian history from the eighth to eleventh centuries. Scandinavian Vikings, also called Norsemen, explored the oceans and rivers of Europe through trade and warfare. The Vikings also reached Iceland, Greenland, Newfoundland, and Anatolia. Some Vikings are believed to have settled at L'Anse aux Meadows, an archaeological site on the northernmost tip of the island of Newfoundland, Canada, at a place they called Vinland.

In England the Viking Age began dramatically on June 8, 793, when Norsemen destroyed the abbey on Lindisfarne. Monks were killed in the abbey, thrown into the sea to drown, or carried away as slaves along with the church's wealth. The Viking devastation of Northumbria's Holy Island shocked and alerted the royal courts of Europe. "Never before has such an atrocity been seen," declared the Northumbrian scholar Alcuin of York. More than any other single event, the attack on Lindisfarne cast a shadow on the perception of the Vikings for the next 1100 years. In the 1890s scholars outside Scandinavia began to rethink the achievements, artistry, technological skills and seamanship of the Vikings.

Until Victoria's reign in Britain, Vikings were portrayed as violent and bloodthirsty. The stories from medieval England had always portrayed them as 'wolves among sheep'. During the nineteenth century, public opinions changed. The first challenges to the many anti-Viking images in Britain emerged in the 17th century. Some scholarly works on the Viking Age became available to readers in Britain. Archaeologists began to dig up Britain's Viking past. Linguists started to work on identifying Viking-Age origins for rural idioms and proverbs. The new dictionaries of the Old Norse language enabled the Victorians to study some of the Icelandic Sagas.

During the second half of the 18th century the Icelandic Sagas were still used as important historical sources, but the Viking Age was regarded as a barbaric and uncivilized period in the history of the Nordic countries. Until recently, what was known about the history of the Viking Age was based on the Icelandic Sagas, the history of the Danes written by Saxo Grammaticus, the Russian Primary Chronicle and the War of the Irish with the Foreigners. Few scholars still accept these texts as reliable sources; historians nowadays rely more on archaeology and numismatics, which have helped people understand the period.

The Norsemen were explorers, colonizers and traders as well as plunderers. The Vikings from Norway explored the North Atlantic and settled Iceland, the Faroe Islands, Shetland and Orkney Islands, Caithness in Scotland, Greenland and (briefly) North America. The Vikings from Denmark raided ports and coastal towns along the coasts of Europe and Britain. The Vikings from Sweden pushed east, into areas that are now parts of Russia and Ukraine, establishing trade connections with the Middle East and beyond.

By the 9th century, a strong central authority was established in Jutland, and the Danes were looking beyond their own territory for land, trade and plunder. Norway had been settled over many centuries by Germanic peoples from Denmark and Sweden who made farming and fishing communities around its coasts and lakes. The mountains and fjords formed strong natural boundaries. The communities remained independent of each other, unlike the situation in Denmark which is lowland. By the year 800, there were 30 small kingdoms in Norway. The sea was the easiest way of communicating between these Norwegian kingdoms and the outside world. In the eighth century Scandinavians began to build war ships and send them on raids. The Viking longships were capable of travel on the open seas but also had a very shallow draft, meaning they could sail into shallower bays and farther up rivers than other ships of their time. This led to the term Viking, which came from the Old Norse word vīk (meaning inlet or bay). A person who went on raids was said to go "viking".

It is unknown what triggered the Vikings' expansion and conquests. This era was at the same time as the Medieval Warm Period (800 – 1300) and stopped with the start of the Little Ice Age (about 1250 – 1850). The lack of pack-ice during their time may have allowed the Norsemen to go "a-viking" or "raiding". It is believed that the heathen Norsemen suffered from unequal trade practices by Christian merchants who were given preference through a Christian network of traders. A two-tiered system of pricing existed among merchants who secretly traded with the Norse heathens. Viking raids occurred both separately and together with regular trading expeditions.

Historians also suggest that the Scandinavian population was too large for the peninsula and there were not enough crops to feed everyone. This led to a hunt for more land to feed the ever-growing Viking population. Internal conflicts, especially during the period of conquest and settlement that followed the early raids, caused the progressive centralisation of power into fewer hands. This meant that lower classes who did not want to be oppressed by greedy kings went in search of their own lands. Those who settled Iceland created Europe's first modern republic with a yearly assembly of elected officials called the Althing.

The earliest date given for a Viking raid is 787 AD when, according to the Anglo-Saxon Chronicle, a group of men from Norway sailed to Portland, in Dorset. There, a royal official mistook them for merchants. They killed him when he tried to lead them to the king's manor to pay a trading tax on their goods. The beginning of the Viking Age in the British Isles is, however, often given as 793. It was recorded in the Anglo-Saxon Chronicle that the Northmen raided the important island monastery of Lindisfarne:

"AD. 793. This year came dreadful fore-warnings over the land of the Northumbrians, terrifying the people most woefully: these were immense sheets of light rushing through the air, and whirlwinds, and fiery dragons flying across the firmament. These tremendous tokens were soon followed by a great famine: and not long after, on the sixth day before the ides of January in the same year, the harrowing inroads of heathen men made lamentable havoc in the church of God in Holy-island (Lindisfarne), by rapine and slaughter." -Anglo Saxon Chronicle

In 794, according to the Annals of Ulster, there was a serious attack on Lindisfarne's mother-house of Iona, which was followed in 795 by raids on the northern coast of Ireland. From bases there, the Norsemen attacked Iona again in 802, causing great slaughter amongst the Céli Dé Brethren, and burning the abbey to the ground.

The end of the Viking Age is traditionally marked in England by three major events: the failed invasion by Haraldr Harðráði, who was defeated by Saxon King Harold Godwinson in 1066 at the Battle of Stamford Bridge; in Ireland, the capture of Dublin by Strongbow and his Hiberno-Norman forces in 1171; and in Scotland by the defeat of King Hákon Hákonarson at the Battle of Largs in 1263. Harold Godwinson was subsequently defeated within a month by William, Duke of Normandy, who was another descendant of Vikings. Normandy had been acquired by Normans (Norsemen) in 911. Scotland took its present form when it regained territory from the Norse between the thirteenth and the fifteenth centuries.

Most Scandinavian historians and archaeologists give a different definition. Instead, the Viking age is said to have ended with the establishment of royal authority in the Scandinavian countries and the adoption of Christianity as the dominant religion. The date is usually put somewhere in the early 11th century in all three Scandinavian countries. The end of the Viking Age in Norway is marked by the Battle of Stiklestad in 1030. They proclaimed Norway as a Christian nation, and Norwegians could no longer be called Vikings.

The Kingdom of the Franks under Charlemagne was especially hard-hit by Viking raiders, who could sail down the Seine without much difficulty. Near the end of Charlemagne's reign and throughout the reigns of his sons and grandsons, a string of Viking raids began, leading to a Scandinavian conquest and settlement of the region now known as Normandy.

In 911, French King Charles the Simple made an agreement with the Viking warleader Rollo, a chieftain of either Norwegian or Danish origin. Charles gave Rollo the title of duke and granted him possession of Normandy. In return, Rollo swore fealty to Charles, converted to Christianity, and swore to defend the northern region of France against raids by other Viking groups. Several generations later, the Norman descendants of these Viking settlers identified themselves as French and brought the French language and their variant of French culture to England in 1066. With the Norman Conquest, they became the ruling aristocracy of Anglo-Saxon England, leading to the change from Old English to Middle English language.

At the start of the Viking age, the Vikings believed in the Norse religion. They believed in a pantheon of gods and goddesses, as well as Valhalla, a heaven for warriors. The lower class of society would go to a place called "hel", similar to life on earth. According to Viking beliefs, Viking chieftains would please their war-gods by their bravery, and would become "worth-ship"; that is, the chieftain would earn a "burial at sea". They also performed land burials which often still included a ship, treasure, weapons, tools, clothing and even slaves and women buried alive with the dead chieftain, for his journey to Valhalla and adventure in the after-life. Poets composed sagas about the exploits of these chieftains, keeping their memories alive.

Freyr and his sister Freya were gods of "fertility", which means being able to grow. They made sure that people had many children and that the land produced plenty of crops. Some farmers even called their fields after Freyr, in the hope that this would ensure a good harvest. Toward the end of the Viking Age, more and more Scandinavians were converted to Christianity, often by force. The introduction of Christianity did not immediately end Viking voyages, but it may have been a factor that helped the Viking Age to an end. 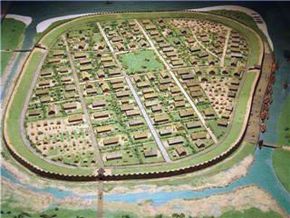 In fiction and theater

In the late 19th century (1800s), Richard Wagner and other artists in the Romantic period made operas and other artwork about ancient Germanic culture. They liked the Vikings because they were not Greeks or Romans. They came up with the idea of Vikings wearing fur clothes and helmets with wings or horns on them and drinking out of hollowed-out animal horns. Some ancient Germans wore helmets with horns on them, but real Vikings did not. Wagner and his partners deliberately dressed the actors in the opera Ring des Nibelungen so they would look like ancient Germans and so the audience would feel like modern Germans came from medieval Vikings.

All content from Kiddle encyclopedia articles (including the article images and facts) can be freely used under Attribution-ShareAlike license, unless stated otherwise. Cite this article:
Viking Age Facts for Kids. Kiddle Encyclopedia.