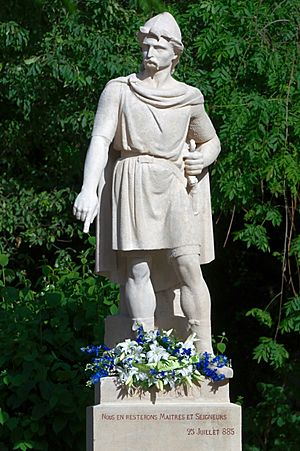 Statue of Rollo in Rouen, Normandy

Rollo (c. 846–c. 928), also called Rolf (Hrolf) was a Viking leader. In 911 he was given lands around Rouen by the Frankish king Charles III the simple. He passed on his ever growing fief to his descendants, known as the counts and later dukes of Normandy. He was the first of the dynasty known as the House of Normandy.

Rollo might have been a son of Rognvald, earl of More (in present day Norway) and was a Viking raider in France. He probably also raided Scotland and Ireland. Rollo played a part in the Siege of Paris (885–86) and then captured Bayeux according to Dudo of Saint-Quentin. While Rollo was given lands around Rouen in 911 by the French king, Flodoard of Reims says that there were many bands of Northmen raiding in western France at the time. In his writing he paid more attention to another group of Vikings under a Ragenold. Flodoard had no way of knowing then that of all the Viking bands those under Rollo would grow to become the great duchy of Normandy.

In 918 King Charles and Rollo met on the border of the Vexin and Roumois. The Roumois was the name then for the province of which Rouen was the capital. In a charter the king confirmed to Rollo the city of Rouen. He also gave him all the territory west to the border of Brittany. By 924 Normandy was growing into a principality. It was at this time he acquired Bayeux and also Maine. Rollo appears in annals only here and there. He was fighting over the castle of Eu against King Raoul. He also came to the aid of King Charles the Simple against Herbert II of Vermandois. Rollo died about 928. He was succeeded by his son William Longsword. 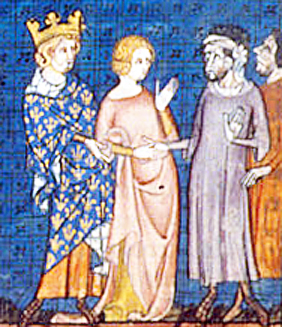 Rollo married first, Poppa. Together they had:

He next married Gisela, daughter of Charles III the Simple, King of France. They had no children.

All content from Kiddle encyclopedia articles (including the article images and facts) can be freely used under Attribution-ShareAlike license, unless stated otherwise. Cite this article:
Rollo Facts for Kids. Kiddle Encyclopedia.