Henry I of England facts for kids 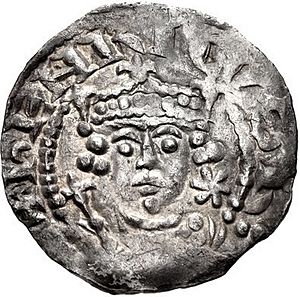 Henry I of England (c. 1068 C.E. - 1 December 1135 C.E.), also called Henry Beauclerc (meaning good scholar), was the King of England. He ruled from, 1100 until his death in 1135. Henry was born in Selby, Yorkshire. He was the fourth son of William the Conqueror and Queen Matilda of Flanders. Henry was the only child born in England. His mother had come to England for her coronation in 1068.

Henry was educated in Latin and the liberal arts. His parents probably raised him to go into the Church when he was old enough. On William's death in 1087, Henry's two older brothers were each left half of their father's kingdom. Robert Curthose became Duke of Normandy. William Rufus became king of England. But Henry, still a minor, was left with no inheritance. Henry purchased the County of Cotentin in western Normandy from Robert. But Robert and William Rufus forced him out in 1091. Henry gradually rebuilt his power base in the Cotentin. He then allied himself with William against Robert. Henry was present when William died in a hunting accident in 1100. Robert was away on Crusade. Henry, who was present when William was killed, rushed to seize the English throne for himself.

As King, Henry tried to make social reforms. He issued the Charter of Liberties which is considered a predecessor of the Magna Carta. He put back in place some of the laws of Edward the Confessor.

Henry and his wife had two children, Matilda and William Adelin. William died in the White Ship sinking on November 25, 1120. Henry also fathered more illegitimate children than any other English King. Estimates by various historians place the number between 20 and 25.

Henry died in 1135. He was visiting his daughter and grandchildren in Normandy. After his death, his daughter Mathilda and his nephew, Stephen, argued over who would become the ruler of England, and started a civil war called The Anarchy.

All content from Kiddle encyclopedia articles (including the article images and facts) can be freely used under Attribution-ShareAlike license, unless stated otherwise. Cite this article:
Henry I of England Facts for Kids. Kiddle Encyclopedia.