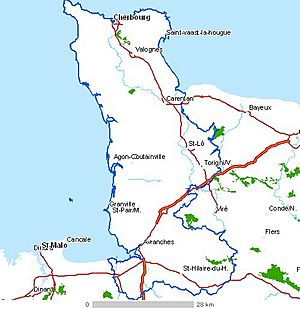 The Cotentin Peninsula (\kō-ˌtäⁿ-ˈtaⁿ\), also known as the Cherbourg Peninsula, is a peninsula in Normandy that is part of the coast of France. It extends in a northwest direction into the English Channel. To its west are the Channel Islands and to the southwest is the Brittany Peninsula. It is in the Departement of Manche, in the region of Normandy. The largest town is Cherbourg on the north coast. Cherbourg is a major port on the English Channel. The west coast of the Cotentin known as Côte des Îles ("Islands Coast") faces the Channel Islands. Ferry links serve Carteret, and the islands of Jersey, Guernsey and Alderney from the port of Dielette. 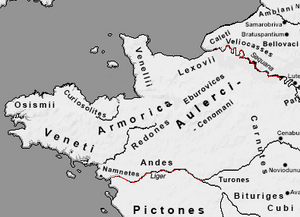 The peninsula formed part of what the Romans called Armorica. Coutances was the capital of the Unelli, a Gaulish tribe. It got its name Constantia in 298 during the reign of Roman emperor Constantius Chlorus. Under the Carolingians it became known as the Cotentin and was controlled by viscounts. For some time these were members of the Saint-Sauveur family. They lived at Saint-Sauveur on the Douve river.

In the ninth century, Vikings settled the Cotentin, which became part of Normandy in the early tenth century. Many place names there come from the Norse language. Examples include La Hague, and La-Hougue both derived from the Old Norse word haugr meaning a hill or mound. Until the construction of modern roads, the peninsula was almost inaccessible in winter because of marshland cutting off the higher ground. This explains occasional historical references to the Cotentin as an island.

King Alan the Great of Brittany waged war successfully on the Norsemen. As the result of his conquests, the Cotentin Peninsula was included in the territory of the Duchy of Brittany. After his death, the Norsemen invaded and occupied Brittany from 907 to 939. While they were eventually expelled by Alan's grandson, Alan II, Duke of Brittany, the subsequent rulers of Brittany were weaker than Alan the Great. The succeeding Dukes of Brittany suffered continuing Norse invasions and Norman raids. Eventually the Cotentin Peninsula was lost to the Brittany, and became part of Normandy.

In 1088 Robert Curthose, Duke of Normandy, gave the Cotentin to his brother Henry, later King Henry I of England. Henry, as count of the Cotentin, established his first power base there and in the adjoining Avranchin to the south During the Hundred Years' War, King Edward III of England landed in the bay of La Hogue, and then came to the Church of Quettehou in Val de Saire. It was there that Edward III knighted his son Edward, the Black Prince. A remembrance plaque can be seen next to the altar. The naval Battle of La Hogue in 1692 was fought off Saint-Vaast-la-Hougue near Barfleur.

The town of Valognes was, until the French Revolution, a provincial social resort for the , nicknamed the Versailles of Normandy. The social scene was described in the novels of Jules Barbey d'Aurevilly (himself from the Cotentin). The grand houses and châteaux; were destroyed during World War II. 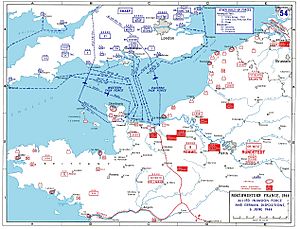 During World War II, part of the 1944 Battle of Normandy was fought in the Cotentin. The westernmost part of the D-Day landings was at Utah Beach, on the southeastern coast of the peninsula. What followed was a campaign to occupy the peninsula and take Cherbourg.

The main economical resource is agriculture. Dairy farming is a prominent activity. Along the west coast, renowned vegetables are grown, such as the carrots of Créances. The renowned trademark "Florette" was created in Lessay. The region is also famous for its shellfish culture. These include oysters from Saint-Vaast-la-Hougue and Pirou. Other products are alcoholic beverages like cider and calvados, made from locally grown apples and pears.

The region hosts two important Nuclear power plants. At Flamanville there is the Flamanville Nuclear Power Plant. The other is the COGEMA La Hague site. It is a large nuclear waste reprocessing and storage complex operated by Areva NC. The nuclear power industry provides many jobs in the region. The roads used for transport of nuclear waste have been blocked many times in the past by environmental action group Greenpeace. Local environmental groups have voiced concerns about the radioactivity levels of the cooling water of both these nuclear sites. These are being flushed into the bay of Vauville. However, the radioactivity is much lower than the natural background levels and does not pose any hazard.

There are two important naval shipyards in Cherbourg. The state-owned shipyard DCNS has built French nuclear submarines since the 1960s. Privately owned CMN builds frigates and patrol vessels for various states, mostly from the Middle East. Tourism is also an important economic activity in this region. Many tourists visit the D-Day invasion beaches, including Utah Beach in the Cotentin. At Sainte-Mère-Église a few miles away from the beach, there is a museum dedicated to the 82nd Airborne Division and the 101st Airborne Division. The Cité de la Mer in Cherbourg is a museum of oceanic and underseas subjects. The main attraction is Redoutable, the first French nuclear submarine, launched in 1967.

Due to its relative isolation the Cotentin is one of the last remaining places the Norman language is spoken. The Norman language writer Alfred Rossel, native of Cherbourg, composed many songs which form part of the heritage of the region. Rossel's song Sus la mé ("on the sea") is often sung as a regional patriotic song.

All content from Kiddle encyclopedia articles (including the article images and facts) can be freely used under Attribution-ShareAlike license, unless stated otherwise. Cite this article:
Cotentin Peninsula Facts for Kids. Kiddle Encyclopedia.