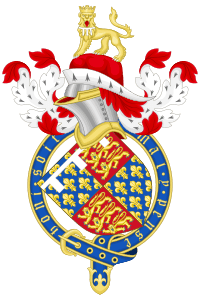 The Black Prince's coat of arms, as heir-apparent to the English throne. 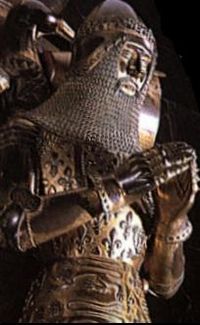 Effigy on tomb of Edward in Canterbury Cathedral

Edward was born at Woodstock Palace, near Oxford. He was made Prince of Wales in 1343, and followed his father into battle against France. He became a famous soldier, helping win the Battle of Crécy and commanding the Battle of Poitiers. In 1361, he married his cousin, Joan of Kent. They had two sons, Edward and Richard. The older son, Edward, died when he was only six.

Edward of Woodstock has become known in history as "the Black Prince", but no one is quite sure of the reason for the nickname. He died at the age of 45, and was buried at the Canterbury Cathedral. As his father was still living, he never became king himself. He asked his father to give the title Prince of Wales to his son Richard, who later became King Richard II of England.

All content from Kiddle encyclopedia articles (including the article images and facts) can be freely used under Attribution-ShareAlike license, unless stated otherwise. Cite this article:
Edward, the Black Prince Facts for Kids. Kiddle Encyclopedia.