Kids Encyclopedia Facts
This article is about the island. For other uses, see Jersey (disambiguation).

Jersey, officially the Bailiwick of Jersey, is a Crown dependency located near the coast of Normandy, France. Jersey was part of the Duchy of Normandy, whose dukes went on to become kings of England from 1066. After Normandy was lost by the kings of England in the 13th century, and the title surrendered to France, Jersey and the other Channel Islands remained attached to the English crown. 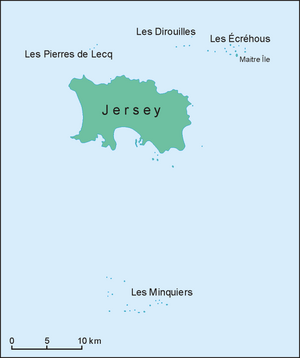 Map of islands of Bailiwick of Jersey

Jersey is a self-governing parliamentary democracy under a constitutional monarchy, with its own financial, legal and judicial systems, and the power of self-determination. The Lieutenant Governor on the island is the personal representative of the Queen.

The Bailiwick of Jersey is not a part of the United Kingdom or of the European Union. It has its own parliament called the States of Jersey which passes laws for the island. Jersey is divided into 12 parishes which elect their own administration. 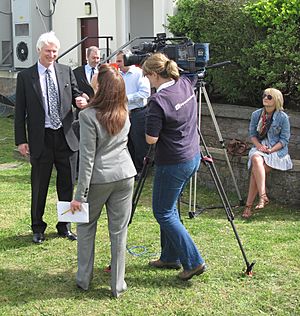 A Channel Television crew interview the Bailiff of Jersey

British cultural influence on the island is evident in its use of English as the main language and the British pound as its primary currency, even if some people still speak the Norman language. Additional cultural commonalities include driving on the left, access to the BBC and ITV regions, a school curriculum following that of England, and the popularity of British sports, including football, cricket and rugby.

All content from Kiddle encyclopedia articles (including the article images and facts) can be freely used under Attribution-ShareAlike license, unless stated otherwise. Cite this article:
Jersey Facts for Kids. Kiddle Encyclopedia.